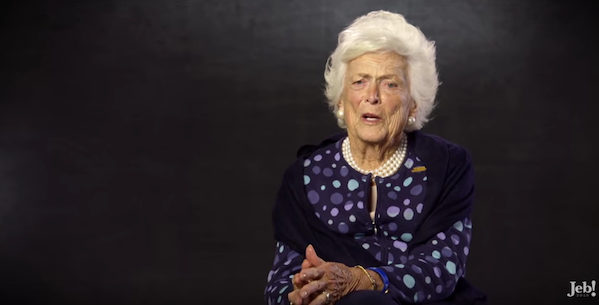 With the matriarch of the Bush family back in the news, we went back into the archives to see what insight our predecessors could bring to bear on a woman who has been in the public eye for many decades. This 1992 column by Marjorie Perloff, titled “Mommy Dearest,” published shortly before the Bush clan suffered a humiliating political defeat at the hands of Bill Clinton, torches the widely held conceit that Barbara Bush was an emblem of traditional family values, using as evidence, rather dubiously it must be admitted, the recollections of Perloff and her daughter, who was friends with Bush’s daughter Dordie in the 1960s. (As my colleague Maggie Foucault put it, it’s like a glorified Mean Girls gossip column.)

So perhaps we should take with a grain of salt the assertions that Dordie, Jeb, and George Jr. were basically raised by maids, and that Barbara herself was “a rich woman whom many of us recall as seeming to enjoy her dogs more than her children.” But! Perloff does have a point when she notes that Hillary Clinton suffered throughout the 1992 campaign for being unlike the first lady, punished by an electorate that “continues to perceive accomplishment in women as threatening.” She’s right that a working mother is a more authentic role model than a stay-at-home mother in the Bush mould, which was a politically concocted idealization that bore little resemblance to reality.

The irony is that Jeb Bush in 2016 is deploying his mother in a slightly different way than his father did, emphasizing her toughness and resilience. If she is not quite a symbol of women’s empowerment, in her attacks on Donald Trump she’s at least a reminder that a boy’s best friend is his mother.