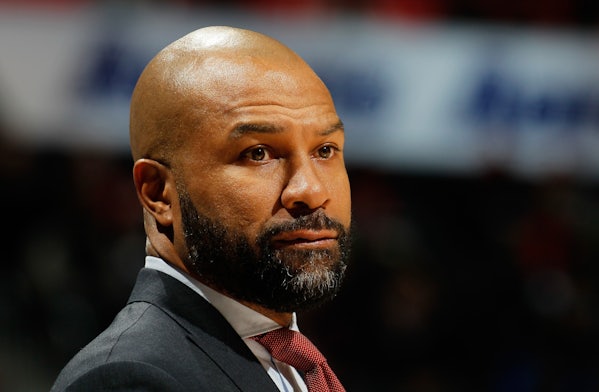 The Knicks fired Derek Fisher for some reason.

It is not a good time to be an NBA coach right now. Fifty coaching jobs have changed hands in the last three years.

So Fisher is the latest victim, but he’s not quite a typical one. Oddly enough, lack of success has tended to be rewarded with more staying power than success, and many (myself included) expected Fisher to be rewarded with job security for sticking with a losing team. The Knicks were atrocious last year and, though better this year, have only flirted with a .500 winning percentage.

There are two big questions right now. The first is, who fired Fisher? Ian Begley reports that “management” was “disappointed in the team’s performance,” but management could mean team president Phil Jackson or James Dolan, the fedora that owns the Knicks. Jackson hand-picked Fisher (after Steve Kerr turned him down) so that seems unlikely—this has all the hallmarks of Dolan meddling. (A related question is, given the roster, what exactly did management expect from this team?)

The second is, how much is Luke Walton going to make next season? The Lakers and Knicks are going to have a bidding war for the Warriors assistant and one has to expect that Jackson will go all in on Walton. It’s possible—likely even—that other opportunities will open up for Walton, but right now these two teams have to look like the favorites.