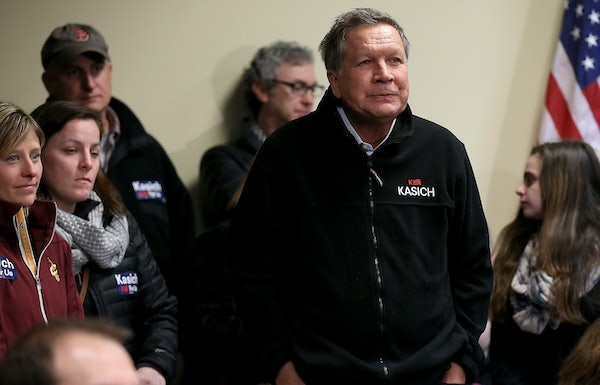 The New Jersey governor has made headlines recently, launching rabid attacks against Rubio. But Kasich—the Ohio governor who rocketed to second place three weeks ago, only to fall back into the single digits in subsequent polls and see the ABC moderators forget to introduce him at Saturday’s Republican debate—is the one surging.

In a recent ARG poll, he is tied with Rubio for second place at 16 percent. A Monmouth poll shows him ahead of Rubio with 14 percent. Kasich advisors are gleefully telling reporters their candidate has “a chance, a real chance” in New Hampshire. The campaign is already airing ads in Nevada and South Carolina.

But if Kasich clinches second place, or finishes a strong third, it’ll say something about the mood in the Republican electorate. Kasich, as I wrote last week, is betting that New Hampshire voters have grown so tired of attack ads that they’ll throw their support behind a relatively obscure Republican who expanded Medicaid and has a Faulkner-esque ability to stretch his sentences to interminable lengths.

If he finishes second, we might even get a reprieve from mudslinging in the Republican race. The primary will be longer, the field larger, and Rubio’s path to the nomination all the thornier.