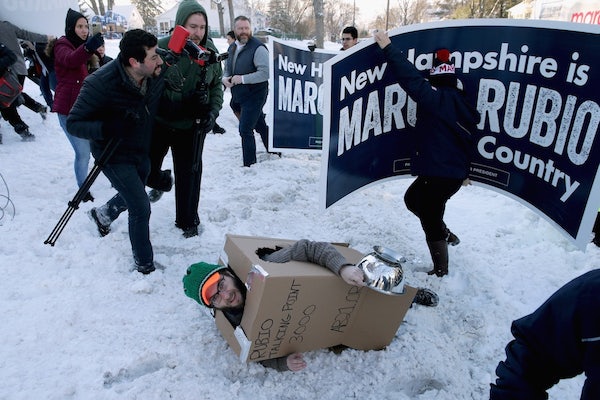 Marco Roboto joined the real thing on the campaign trail in New Hampshire this morning.

A few enterprising trackers from the progressive American Bridge 21st Century PAC showed up at a Rubio campaign event in New Hampshire this morning dressed as robots. They followed the candidate around for a while, ruining a perfectly good photo op.

Video and photos from the encounter suggest that Rubio’s supporters didn’t react well to the robot dopplegängers. In multiple shots by a Getty photographer, the trackers are on the ground or being shoved. In a video from the same event, a Rubio supporter is seen manhandling one of the robots until he realizes that about a thousand cameras are filming him.

Ever since Chris Christie dropkicked Marcobot in his control panel at the most recent Republican debate, his team of support technicians have been inundated with malfunctions, like this one where he got caught in a computing loop, or this one where he suffered a syntax error. And then there was this news hit from last night, filmed in New Hampshire: