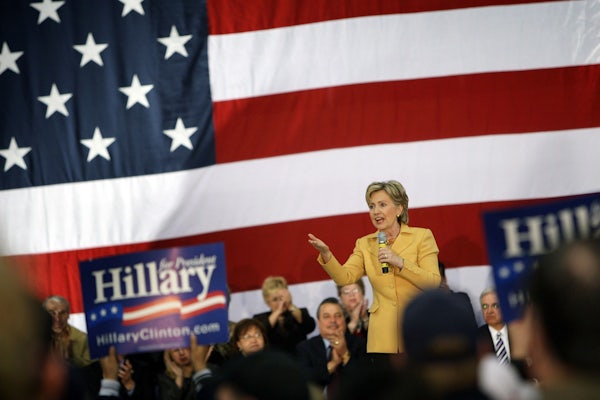 Is Hillary Clinton hearing the ghosts of primaries past?

A lot’s changed for Hillary Clinton since her last go-around in the primaries. She won the Iowa caucuses this time (by a hair), which she lost to Barack Obama in 2008. And while she beat Obama in New Hampshire in 2008, she’s predicted to lose to Bernie Sanders tonight.

But while some things change, others stay the same. Back in 2008, we sent Jeffrey Rosen to cover the New Hampshire primaries. What he wrote of Clinton’s struggle to outshine Obama’s popular message of hope sounds a whole lot like what she’s facing with Bernie Sanders’s talk of revolution:

As politics becomes increasingly personalized, swing voters aren’t interested in policy debates, so they vote for the candidate with whom they feel the greatest emotional connection.... Hillary Clinton’s candidacy is based not on a bottom-up community organizer’s sense of hope but on a top-down progressive’s sense of entitlement.

Hillary isn’t the only one who might be experiencing deja vu. Hubby Bill minced no words recently when he accused Sanders’s online supporters of sexism, and Sanders’s campaign of hypocrisy and subterfuge. Back in 2008, the former president’s outbursts repeatedly made the headlines, as Michael Crowley reported:

Bill raged at “the breathtaking disadvantage in the information that’s coming to the voters” faced by Hillary, providing Obama with “the biggest fairy tale I have ever seen.” ... A day before the primary, Bill issued his now-famous observation that “I can’t make her younger, taller, male.”