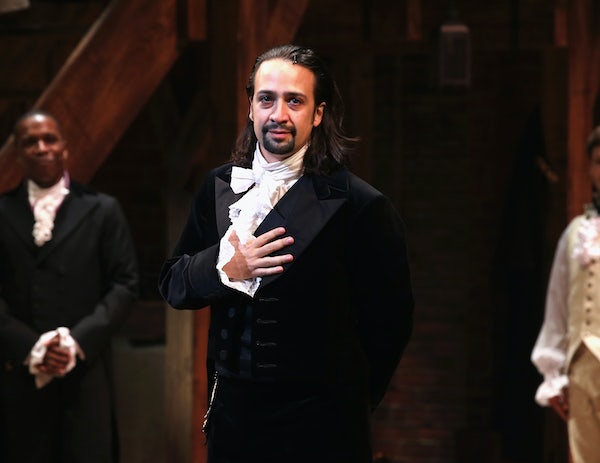 Here’s how Lin-Manuel Miranda can EGOT.

Okay, let’s face it, the Grammy awards mean very little to the megastars of the music industry—Beyoncé would need a house made of doors for all her Grammy doorstops. But Grammys are an essential step to the holy grail for entertainers, the EGOT: Emmy, Grammy, Oscar, and Tony. There is only one Grammy performer tonight who is ready to EGOT: Lin-Manuel Miranda. He’ll do it by taking a page from one of the youngest members of the Hall of EGOT, Robert Lopez, who spun Tony fame into EGOT lore after only ten years, a record-breaking achievement.

Grammy: Do be a dear and leave the Lin-Manuel’s Grammy at the stage door to pick up after the cast’s performance.

Tony: After a sold out run at the Public Theater, there was talk of hurrying Hamilton to Broadway in time for the 2015 awards, but doing so would have trounced the very worthy Fun Home, also produced by the Public, which went on to win Best Musical. Instead the show transferred to Broadway in August of last year, and expect it to destroy everything at the 2016 Tonys on June 7.

Oscar: When Disney calls, Lin-Manuel must answer. Robert Lopez turned his Tony wins for off-color lyrics in Avenue Q and the Book of Mormon into the snow-white power anthem “Let It Go.” Not every level of the EGOT needs to be a blockbuster, but for Lopez, and parents everywhere who wish his death, “Let it Go” may even succeed Hamilton for utter domination of hearts and minds. Lin-Manuel can take it easy here. Upgrade the cantina music for Star Wars and he can easily win this underappreciated Oscar category

Emmy: Lopez won his for a children’s show called Wonder Pets, but he was also nominated for his music and lyrics for the 87th Academy Awards. If possible, the wisest path is to turn O into E, and frankly, the O needs a shakeup. It would be in the Academy’s best interests to hire Lin-Manuel for the job. EGOT in eight years, just watch.

(Update: Lin-Manuel already has an Emmy! For the 67th Tony Awards. And it should be noted that he cleaned up a Grammy and Tony for 2008’s In the Heights. He’s working on the music for next year’s Disney film Moana, so we can expect to have this thing wrapped up by 2017. How’s that Pulitzer coming?)