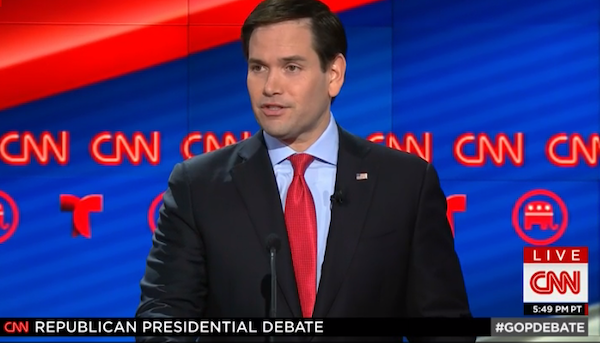 “We are the party of diversity,” says Marco Rubio, completely without irony.

The opening of the CNN Republican debate focused heavily on immigration, since the debate was being broadcast in cooperation with Telemundo and took place in Texas, which not only has a large Hispanic population, but a majority of voters who think undocumented immigrants should be deported.

Both Cruz and Rubio referred to their Cuban heritage, perhaps to try and soften their hardline stance, but moderator Maria Celeste Arrarás wasn’t letting them off easy. She wanted to know why they were arguing about who had a harsher stance on immigration, when they could be using their positions as the first Hispanic men to get this far in a presidential election to expand the Republican base.

“The media has a definition of Hispanics that you can only be Hispanic if you’re liberal,” Cruz replied. “The Obama economy has done enormous damage to the Spanish community.”

“On this stage tonight are two sons of Cuban immigrants and an African American,” Rubio said. “We are the party of diversity, not the Democrats.”

Rubio is, admittedly, correct in his observation about the people standing on stage, but not in his analysis of the party off-stage. Blacks, Asians, Jews, and Hispanics all favor the Democrats. The fact that Cruz and Rubio haven’t won over more Hispanic voters shows how out of touch their policies—or their personalities—are.