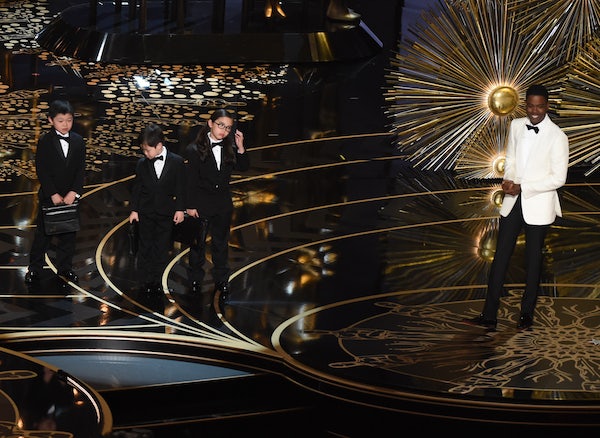 Chris Rock got so much right about diversity at the Oscars—except for the Asian jokes.

Rock has been praised, deservedly, for tackling the Academy Awards’ lack of diversity head on at last night’s show. But for all the righteous indignation, Rock’s Oscars showed very little sensitivity towards people of other ethnic backgrounds.

Dev Patel and Priyanka Chopra came out to present, Mexicans Alejandro Iñárritu and Emmanuel Lubezki won awards, as did Pakistani director Sharmeen Obaid-Chinoy, but by and large the show was about the relationship between black people and white people. Not only does this ignore all the talented people from other ethnic backgrounds who also suffer from a lack of opportunity in Hollywood, but it reflects our tendency to polarize the racial conversation in this country between only blacks and whites.

Asians, in particular, were forgotten at these Oscars—except for an unfortunate gag during which Rock had three Asian children dressed as PricewaterhouseCoopers accountants come on stage. Because all Asians are accountants. Sacha Baron Cohen, dressed as his character Ali G, also took a swing at “tiny yellow people with small dongs”—ostensibly the Minions, but you don’t have to be Asian to get the subtext in that joke.