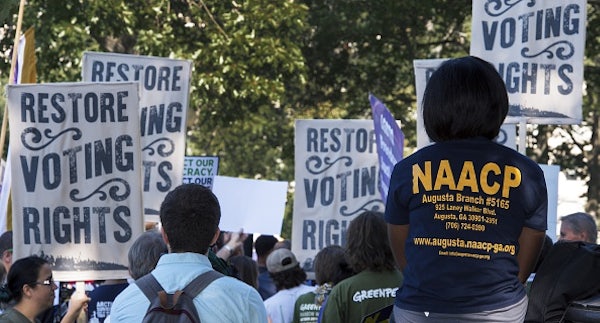 For many southern states, Super Tuesday will be a voter suppression test drive.

Shelby County v. Holder, the 2013 Supreme Court case that gutted the enforcement mechanisms of the Voting Rights Act, came out of Alabama, which will make its Super Tuesday debut tomorrow. Texas, another Super Tuesday newcomer, was among the first states to pass aggressive voter ID laws in Shelby’s aftermath. Similar measures have since been implemented across the country, ostensibly to address rampant voter fraud that no one can prove exists.

In total, five of the 13 states with primaries or caucuses scheduled for tomorrow—the other three being Tennessee, Georgia, and Virginia—have restricted access to the polls. “Voters of color will be disproportionately affected by the new restrictions,” Ari Berman, the author of Give Us The Ballot: The Modern Struggle for Voting Rights in America, told The Washington Post.

For now, that means the most immediate political impact will be seen on the Democratic side, where Hillary Clinton has increasingly come to rely on a sizable lead over Bernie Sanders among black voters. But as Wendy R. Weiser, the director of the Democracy Program at NYU’s Brennan Center for Justice, explained, it’s better to understand Tuesday as “an early glimpse into what the bigger problems could look like come November”—and for years going forward.