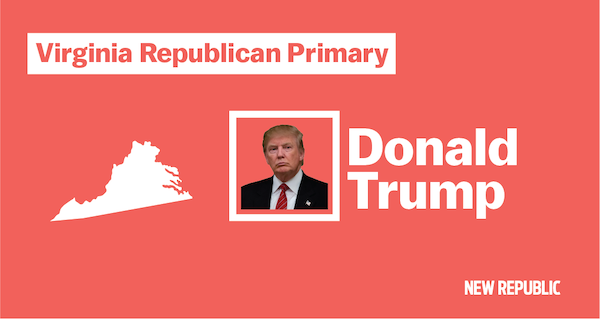 Donald Trump may have John Kasich to thank for his win in Virginia.

Fox News and CNN have announced that Trump narrowly beat Marco Rubio in the Republican primary in Virginia on Tuesday, dealing a serious blow to Florida senator.

Virginia was the only state besides Minnesota that Rubio was hoping to win. He was campaigning hard there over the weekend, visiting the suburbs of Richmond, Norfolk, and northern Virginia—affluent, populous areas where the voters are slightly more moderate than the rest of the state.

Kasich has also been targeting the same areas in Virginia, holding a large rally just outside Washington, D.C., in Arlington on Super Tuesday.

Granted, Rubio did perform better than expected in the state. Trump was besting him by about 14 points in recent polls. Rubio can now make the argument that he is gaining on the media mogul. He’ll also walk away with a decent portion of Virginia’s 49 delegates. That might be enough to give him a modicum of momentum going into Florida.

But without Kasich in the picture, Rubio could have actually won the state, something he desperately needed.

Now, Rubio faces the sobering possibility that even with full coffers and the Republican establishment behind him, he may emerge from Super Tuesday without winning a single state—and Kasich may be responsible. With the race tighter than ever and Donald Trump looking increasingly inevitable, expect the Republican establishment to redouble its pressure on Kasich to drop out.