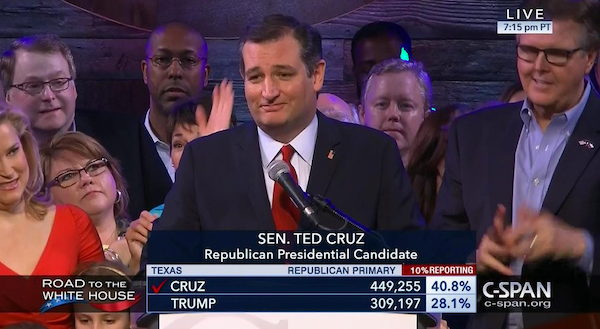 “Tomorrow morning, we have a choice,” Cruz said. “So long as the field remains divided, Donald Trump’s path to the nomination remains more likely, and that would be a disaster for Republicans, for conservatives, and for the nation.” (As per a Gawker report, Cruz was holding this event at a bar “owned by an astoundingly racist radio host,” so take the handwringing about Trump’s destructiveness and vulgarity for what it’s worth.)

He then broke out a line you are going to hear a lot more of in the coming days:  “After tonight, we have seen that our campaign is the only campaign that has beaten, that can beat, and that will beat Donald Trump.” With that in mind, Cruz asked the other candidates in the Republicans’ “deep, talented, honorable field” to “prayerfully consider coming together, united.”

Fox News had Rubio on immediately after Cruz’s speech, and the Florida senator made it clear he isn’t going anywhere. But at some point soon, Republicans may have to begin taking Cruz’s logic seriously, assuming it’s not already too late to do so.