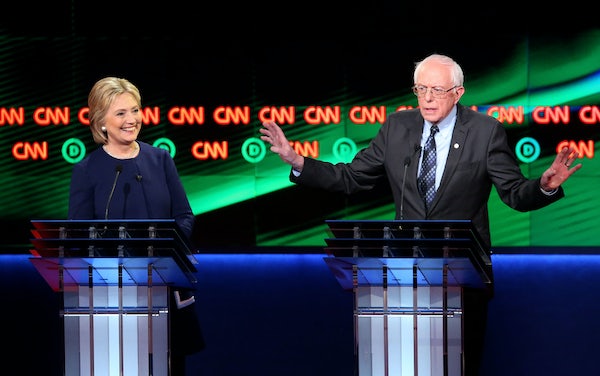 This is what it looks like when two adult presidential candidates debate policy rather than penis size.

It was only a few days ago that the curiously coiffed man-child who’s leading the race for the Republican nomination said on national TV, without a hint of shame, “Look at these hands. If they’re small, something else must be small. I guarantee you there’s no problem. I guarantee you.”

On Sunday night in Flint, Michigan, the two candidates competing for the Democratic nomination debated issues that matter not in high school locker rooms, but in real life. Hillary Clinton and Bernie Sanders tangled over:

Tonight’s only testy moment, unrelated to policy disputes, came when Clinton interrupted Sanders and he replied, “Excuse me, I’m talking.” Some observers saw sexism; some saw a double-standard; and some simply saw a politician trying to finish his point.

It says a lot about the decency gap in the 2016 race that the most controversial quote of the Democratic debate began with “excuse me,” whereas on the Republican side it’s only a matter of time before demands to release tax returns give way to demands to drop trou.