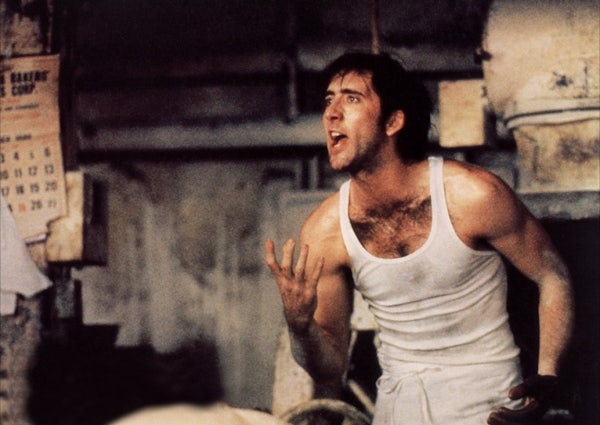 Which Nicolas Cage will direct the adaptation of Joyce Carol Oates’s book?

Cage is set to both direct and star in an upcoming adaptation of Oates’s Rape: A Love Story (given the new Hollywood title Vengeance: A Love Story), the story of a gang rape and its aftermath. This seems an unusual combination of creative energies, but Cage is a man of many colors. Which version of him will appear as director of Vengeance, and what type of film will it be?

Bad Lieutenant: Port of Call New Orleans Cage: Cage’s character is heavily addicted to drugs. He plants evidence on the rapists, but it’s okay, because they’re rapists. He’s still addicted to drugs at the end.

Moonstruck Cage: Cage, one-handed and wearing a dirty undershirt, falls in love with the rape victim and woos her with some Sicilian phrases and an unerringly large moon. Cher makes a cameo.

Adaptation Cage: This version is really more about Cage making the movie than it is about Oates’s book. Cage gets in too deep wondering how to capture her genius, and struggles with playing both Cage-the-actor and Cage-the-director. He embarks on a tangled relationship with Oates herself before realizing that the real story is in her ill-advised tweets.

Raising Arizona Cage: Cage is a lovable, criminal doofus with an atrocious mustache. He kidnaps the rape victim’s daughter and hijinks ensue. A laugh-out-loud black comedy!

National Treasure Cage: Cage is convinced that the only “vengeance” comes from monetary gain, and so hopes to uncover a treasure hidden centuries ago by the Illuminati. To find it he must break in to the local library to steal a map written on the back of a reproduction Bill of Rights. Then he must take that map to the top of Trump Tower at dawn. Then he must perform a blood sacrifice, instructions for which are encoded on the two-dollar bill.

Ghost Rider Cage: A very true-to-the book adaptation, but Cage’s character is riding a motorcycle and on fire for the entire film.

If none of these appeal to you, there are about 50 other Cages for you to choose from.