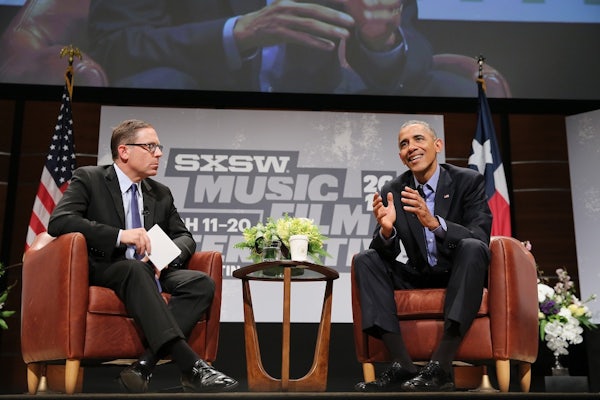 During a panel at South by Southwest on Friday afternoon, Texas Tribune Editor Evan Smith asked Obama about the ongoing dispute between the federal intelligence community and Apple.

He wouldn’t comment on the Apple case specifically, but did say he is hoping the tech community and law enforcement can figure out a way to avoid the kind of absolutism that has characterized the debate between privacy and security advocates.

“The question we now have to ask is, if it is possible to make an impenetrable device or system where the encryption is so strong there’s no key, there’s no door at all, then how do we apprehend child pornographers?” he posited. “How do we solve or disrupt a terrorist plot?”

He pointed to other real-world examples—like airport security screenings and drunk driving checkpoints—where the public has come to accept a minimal level of intrusion in the name of security, arguing that Americans should accept a similar compromise with their technology.

“If government can’t get in, then everyone’s walking around with a Swiss bank account in their pockets. There has to be some concessions.”