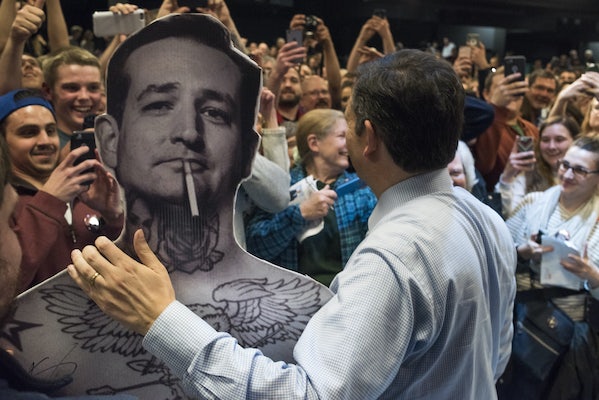 Eli Lake reports that Cruz will roll out his team later today, which ostensibly should help Cruz make the case that he is more serious about national security than Donald Trump, who has literally no foreign policy advisers and says he is “speaking with myself” on the issue. But some of the people who have Cruz’s ear are just as batty. There’s Frank Gaffney, a birther who popularized a conspiracy theory that the Missile Defense Agency’s logo was evidence that President Obama was in thrall to Sharia law. There’s also Andrew McCarthy, another birther who asserted that Obama was “raised as a Muslim,” praised the death panels conspiracy theory, and questioned whether Bill Ayers was the real author of Dreams from My Father. Lake presents Gaffney and McCarthy as being part of a team of rivals, since Cruz’s team also includes veterans of the Bush administration. But he’s closer to the mark when he writes, “His new team of national security advisers ... has something for everyone.” Call it a subtle play for the birther caucus, aka Trump’s base.