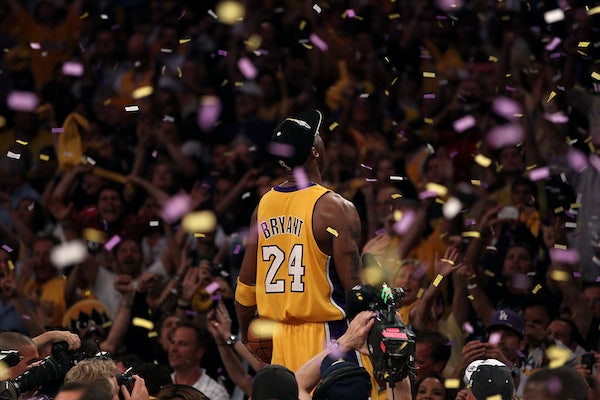 Bryant’s story already had an ending, really. It’s a familiar story, in which a extraordinary young man enters the league and totally wrecks shit, snatching the crown from the head of the last king. He wins and wins and wins, but success is never enough—he always needs more. So then there’s an inevitable personal and professional fall. And then an inevitable maturation and reclamation of what was already his, this time the right way. Then he rides into the sunset, an old sage, shaking his head at whatever young guns are trying to claim his legacy.

Except Kobe’s story didn’t quite play out that way. Bryant’s real last game was April 12, 2013—that was the last time we saw a Kobe that could’ve been called Mamba, when he tore his Achilles tendon, ending a truly disastrous experiment by the Los Angeles Lakers to write a storybook ending for one of their most iconic players. In the previous offseason the Lakers had acquired Dwight Howard and Steve Nash, who were supposed to help Kobe win more NBA Championships than Michael Jordan. It didn’t work—they didn’t gel with their coaches or each other. The team failed, Bryant’s Achilles gave out, and he’s spent the rest of the past three seasons in a kind liminal zone, playing but not playing, uncomfortably easing into retirement. For the last three seasons, Bryant has been the Flying Dutchman of the NBA. (If any NBA player has ever raged against the dying of the light, it was Kobe.)

In December, Bryant trademarked “HeroVillain,” a fitting description of his real final act, when he won two championships with Pau Gasol and said all—well, most of—the right things about maturation. (One of Kobe’s non-basketball legacies is his terrible nicknames. Black Mamba is... fine. HeroVillain is ridiculous and “Vino” was one of the dumbest self-assigned nicknames ever.) The public didn’t forgive Bryant for his alleged sexual assault or for driving his teammates insane (or for driving Shaquille O’Neal out of town) but they allowed Bryant to have a complicated redemption narrative—Bryant was complicated, the NBA’s antihero. But now, three years after that injury, Bryant is neither hero nor villain nor herovillain. The storybook ending didn’t happen. For the last three years, he’s just been a guy playing basketball, mostly pretty badly.