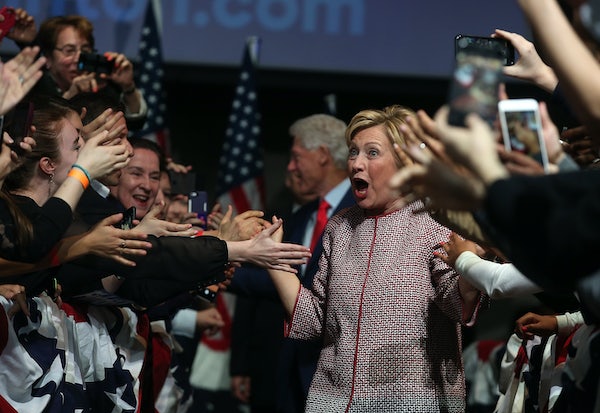 Hillary Clinton thinks she just wrapped this thing up.

This is not the first time Clinton has tried to transition to the general election (or the second, or the third or the... you get it), but her victory speech after her commanding victory in today’s New York primary was her most general election-y yet. It was a new kind of stump speech, aimed more at Donald Trump and Ted Cruz than at Sanders. Sure, there was a Sanders subtweet early on: “Under the bright lights of New York, we have seen that its not enough to diagnose problems—you have to explain how you actually solve the problems!” But it was mostly about Trump. Take this chunk, for example:

You know, it’s becoming clearer that this may be one of the most consequential elections of our lifetimes. Donald Trump and Ted Cruz are pushing a vision for America that’s divisive, and frankly, dangerous. Returning to trickle-down economics, opposing any increase in the minimum wage, restricting a woman’s right to make her own healthcare decisions, promising to round up millions of immigrants, threatening to ban all Muslims from entering the country, planning to treat American Muslims like criminals!

Still, Clinton should know by now that transitioning to the general is not up to her—Sanders has consistently forced her to face him, not Trump and Cruz, for the last couple of months. Sanders’s disappointing showing in New York will force him to make a choice—he can stay on the offensive and attack the legitimacy of Clinton’s victory, or he can focus on building and sustaining the movement he has helped create, and using it to influence the Democratic Party. Sanders is currently in Vermont, trying to figure out where to go from here, but Clinton knows exactly where she’s going: to the general election, as the Democratic nominee.