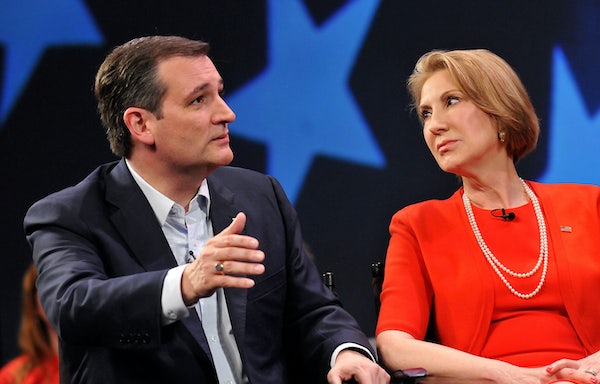 Ted Cruz has reportedly chosen Carly Fiorina to pretend to be his vice president.

After getting absolutely obliterated in five primaries last night, Cruz teased a “major announcement” this afternoon. According to a report from an ABC News affiliate, he will announce that his former opponent Carly Fiorina will be his running mate, should he win the nomination.

Unfortunately for Cruz and Fiorina, that looks less likely today than it has at any other point in this election cycle. That’s partly the point: This is a last ditch effort, aimed at winning over delegates and, presumably, Indiana voters. Cruz absolutely has to win Indiana to keep the hope alive of forcing a contested convention, though it’s not immediately clear how Fiorina helps him accomplish that. In fact, choosing Fiorina may have the opposite effect—more than anything it shows how far Cruz is from the presidency.