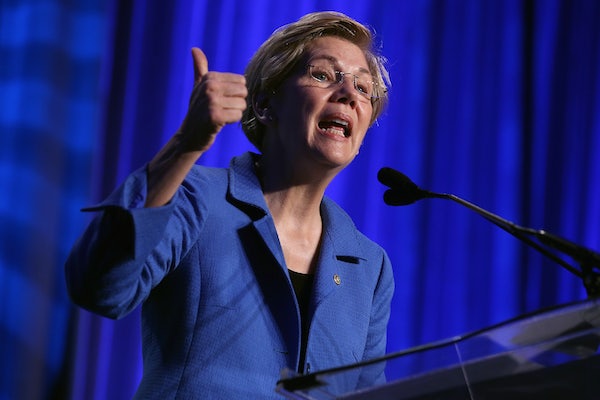 The emergence of mass shootings as the preferred source of mayhem for Islamic extremists has scrambled national security politics in America by putting Second Amendment absolutism in direct conflict with maximal toughness on terrorism. Whereas after 9/11 Republicans denounced civil libertarians opposed to the PATRIOT Act and indiscriminate surveillance as terrorism enablers, they now find themselves hoisted by their own ... guns.

Democrats are well within their rights to press their advantage here, insofar as they can create a wedge issue to advance worthwhile, across-the-board gun regulation. Instead, they are turning themselves into mirror images of the most unrepentant Republican demagogues of the last decade.

Warren and Murphy’s talking point stems from the Democrats’ decision to humiliate Republicans by making them vote against creating a gun-analog to the Terrorist Watch List. In so doing, Democrats abandoned the high-ground consensus (such as it was) that the No Fly List and Terrorist Watch List are bad. This was arguably worth it as a demonstration of the Republican Party’s general servitude to gun culture: Forget extensive background checks for all gun purchases or any other deterrent to wannabe murderers getting guns, Republicans won’t even make it harder for suspected terrorists to buy guns. But having run up against the GOP’s correct-but-selective interest in due process, leading Democrats have decided to accuse Republicans of being in cahoots with terrorists in a tendentious and inaccurate way. Suffice it to say, Senate Republicans don’t sell guns to ISIS any more than dovish Democrats provided them aid and comfort after 9/11.

What we’re seeing is less likely to end with Republicans caving toward a constitutionally firm suite of gun laws that actually reduces the risk of mass shootings, than with the normalization of the kind of rhetorical nonsense that gets us wars and indiscriminate surveillance.