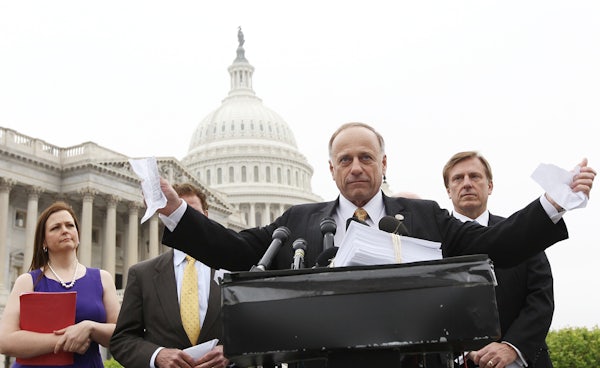 Steve King’s take on Harriet Tubman is a prime example of conservative anti-anti-racism.

The Iowa congressman thinks that putting Tubman on the $20 bill is “racist” and “sexist.” This might seem like a perverse argument, but it is in keeping with a broader conservative view that any challenge to the racial and gender status quo is a form of prejudice. As King explained: “I am a conservative, I like to keep what we have. ... This is liberal activism on the part of the president that’s trying to identify people by categories, and he’s divided us on the lines of groups. ... This is a divisive proposal on the part of the president, and mine’s unifying. It says just don’t change anything.”

This is an usually clear expression of the right-wing view of racial and gender politics: The current system is fine, so any attempt to increase representation (let alone power) for women and people of color is favoring them in a way that’s sexist and racist to men and white people.

King’s attempt to nix Tubman from the $20 bill was too much even for House Republicans and died in committee, but his thinking isn’t unique to him. The presumptive Republican nominee Donald Trump agrees with King, and countless conservative pundits echo King whenever they complain about reverse racism or misandry.