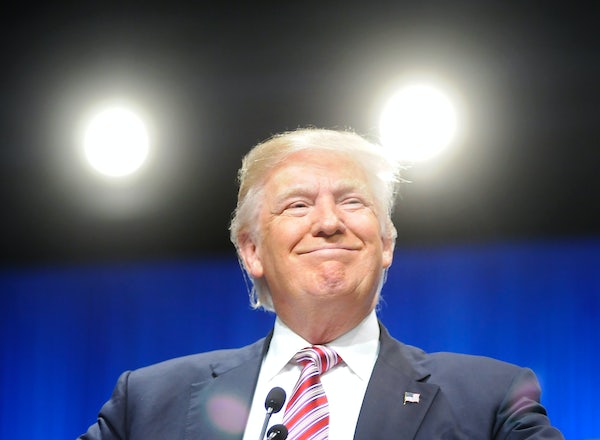 In shifting gears on the minimum wage, Trump gave the finger to the Republican Party.

Last night Bernie Sanders upbraided Trump’s position on the minimum wage. “He does not support raising the federal minimum wage of $7.25 an hour—a starvation wage,” Sanders said in his speech to the Democratic National Convention. “While Donald Trump believes in huge tax breaks for billionaires, he believes that states should actually have the right to lower the minimum wage below $7.25.”

Trump took note of Sanders’s words and lashed out tonight on Bill O’Reilly’s show. Trump claimed that he wants a minimum wage of around $10, although he thinks this should be left up to the states.

It’s not clear whether this purely verbal support for a policy Trump wouldn’t implement as president effectively answers Sanders’s complaint. The way Trump expressed himself was also curious. “I know it’s not very Republican to say but you have to help people,” the Republican presidential nominee said.

Normally a presidential candidate doesn’t blurt out that his own party doesn’t want to help people, but Trump is a special sort of candidate. He’s only intermittently been a Republican for his adult life and clearly despises the party’s orthodoxy on many issues. During his acceptance speech in Cleveland, he only identified himself as a Republican when noting that he defeated other party members and, more glancingly, when expressing gratitude that his overtures to LGBTQ people won applause. The simple fact is that Trump has shallow roots in the party he now leads, which his abrupt turn on the minimum wage illustrates.