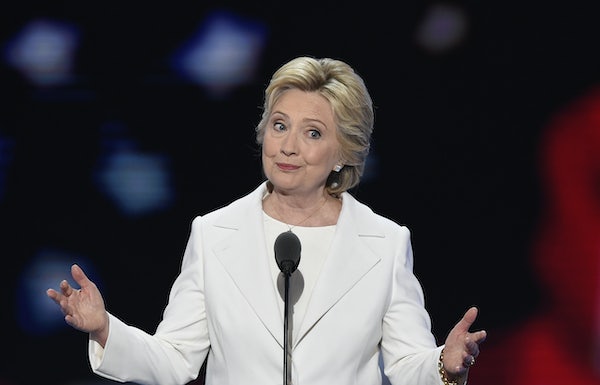 Clinton’s speech made one point exceedingly clear: She is the anti-Trump. She’s experienced, compassionate, and optimistic; she tears down barriers instead of building walls; she believes that America’s best days are just around the corner. Even her outfit—a striking white pantsuit—felt like a message: She is the candidate of light, out to defeat the candidate of darkness.

It was a wide-ranging speech, perhaps exceedingly so. She seemed to be reaching out to every group in a big tent that keeps getting bigger, which made the speech at times read like she was checking off boxes. She said she would be a faithful steward of Bernie Sanders’s movement—“You’ve put economic and social justice issues front and center where they belong”—while claiming to be the true heir of Ronald Reagan’s Morning in America™.

But more than anything, she made the case that she was the only truly American candidate running—the only candidate who believes in the country’s promise and potential. “Stronger together is a guiding principle for the country,” she argued.

At its best, though, the speech was about what you could call the Hillary Doctrine. This line stood out in particular: “You have to change both hearts and laws.” Clinton was clearly aware that most Americans are skeptical of her, that they interpret her pragmatic and technocratic impulses as being cold and indifferent. In her speech, Clinton attempted—and largely succeeded—in turning that on its head. Instead, she argued that making carefully considered decisions was the most compassionate possible response—that it comes from a position of deep feeling, rather than cool calculation. That, most of all, it comes from the fact that she cares about the people her policies affect.