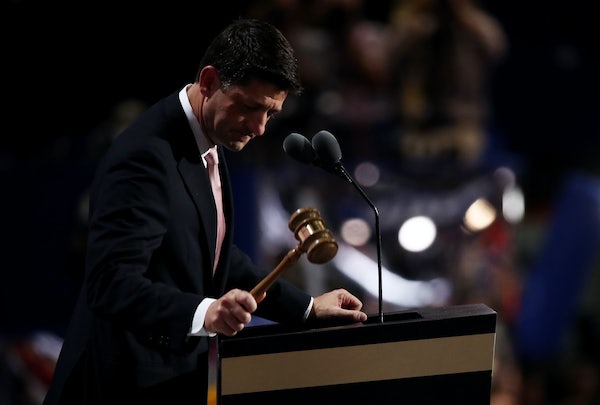 Is it worse for Republicans to be associated or dissociated with Trump? The answer is ‘yes.’

Paul Ryan’s decision to restate his support for Donald Trump is as good an occasion as any to revisit an ongoing debate among Democrats about how best to campaign against Republicans this fall.

A fairly evident tension between different arms of the Democratic Party has bubbled to the surface, thanks to hacked DNC emails. The disagreement stems from a Clinton campaign decision, affirmed by President Obama, to distinguish between Trump and Republicanism as an electoral strategy.

This stands in contrast to efforts by the DNC, as well as congressional leaders and state parties, to tie Trump like an anvil around the necks of other Republican candidates. Their concern is Clinton will let incumbent senators and other vulnerable Republicans off too easy, and harm the party’s down-ballot efforts.

If you squint you can see their concerns validated in swing state polls, which show Republican candidates like Senator Kelly Ayotte of New Hampshire polling ahead of Trump by five points. But looking at it that way loses sight of the bigger picture: Ayotte is still down by 10 points against her Democratic opponent. If “disaggregating” Trump from down-ballot Republicans has the effect of isolating Trump and drawing his numbers into the 30s, the party will descend into infighting (actually, this is already happening) and the down-ballot issue will take care of itself.

But even this is too binary a view. Nothing Clinton or Obama has done or will do prohibits individual candidates from linking their opponents to Trump. And for that matter, Clinton and Obama aren’t preemptively absolving Republicans so much as offering Republicans an opportunity to absolve themselves. Republicans aren’t really biting yet, and probably never will, at least not in a way that helps down-ballot Republicans. Ryan still supports Trump. Swing-state Republican senators are still blocking Merrick Garland’s Supreme Court nomination, holding a vacancy open for Donald Trump to fill. These are the telling facts. Obama and Clinton have given them an opening, and they’re turning it down.

Now imagine dissent overwhelms GOP leadership and the Senate confirms Garland. Yes, Republicans like Ayotte will have demonstrated a degree of independence from Trump, but they’ll have made themselves pariahs to conservative voters. Endorsing Trump is bad for them. Repudiating Trump is bad for them. The binary view of this is a bit like asking whether two angels can dance on the head of one pin, when that pin is melting in a pit of lava. The best, classiest lava.