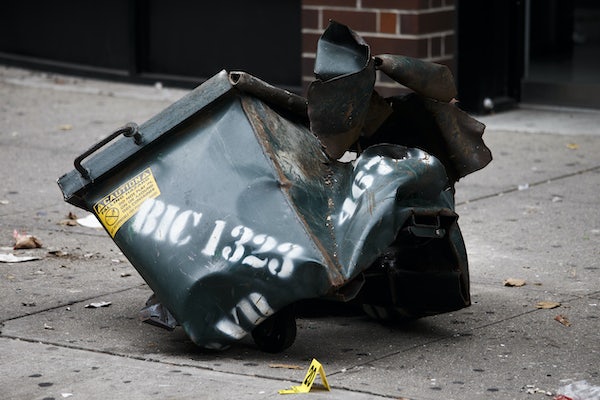 What we know about this weekend’s attacks in Minnesota, New York, and New Jersey.

On Saturday morning, a pipe bomb exploded along the route of a Marine Corps Charity run in Seaside Park, New Jersey. No one was hurt—the race had not begun—and the event was eventually cancelled. That evening, eight people were stabbed in a mall in St. Cloud, Minnesota, by a man wearing a security uniform. That man was eventually shot by an off-duty police officer. All eight people were treated and released for non-life threatening injuries. At roughly the same time, a pressure cooker bomb—similar to the one used in the Boston Marathon bombing—blew up in the Chelsea neighborhood of New York City. Twenty-eight people were treated and released for non-life threatening injuries. A second, unexploded IED was found nearby. And late Sunday and early Monday, a number of explosive devices were found in a backpack in a garbage can in Elizabeth, New Jersey; one of them exploded while a robot was attempting to disarm it.

The St. Cloud Times reports that the attacker in Minnesotia is Dahir Adan, Somali-American college junior and private security contractor. It has been reported that he made references to Allah and asked at least one person if they were Muslim before stabbing them. ISIS has claimed that the man was a “soldier of the Islamic State,” but there’s no evidence of a direct link—ISIS often takes retroactive credit for “lone wolf” attacks it may have inspired.

The attacks in New York and New Jersey are believed to be related. On Monday morning, the FBI released a bulletin identifying Ahmad Khan Rahami, 28, of Elizabeth, New Jersey, as a suspect and reportedly searched Rahami’s Elizabeth home. Rahami was born in Afghanistan and is a U.S. citizen. He “should be considered armed and dangerous,” according to authorities. There are reports that Rahami is part of an “active terror cell.” Shortly before the bombs were discovered outside of the Elizabeth train station, five people in a “vehicle of interest” were stopped near the Verrazano-Narrows Bridge in New York; all five are still in custody as of Monday morning. We’ll update this post as more information becomes available.

Update: Rahami has been taken into custody, following a shootout with police in Linden, New Jersey, according to NBC New York.