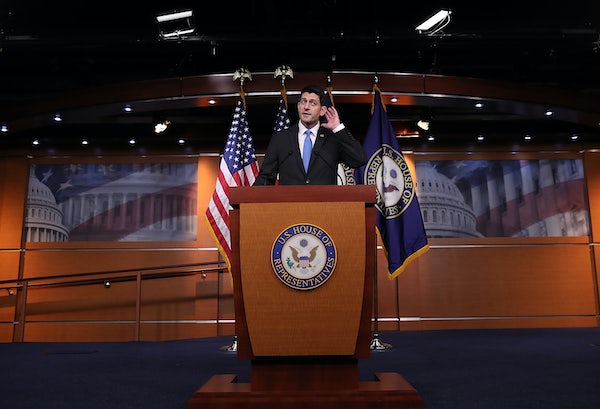 Millennials, unlike some other demographics we won’t mention, are getting arrested to protest Donald Trump.

Despite this week’s panic about millennials handing the presidency over to Trump, which my colleague Brian Beutler has handily rebutted, this morning a diverse group of millennials conducted a surprise sit-in outside Speaker Paul Ryan’s office. The protesters held the GOP—Ryan very much included—responsible for Trump’s rise, and demanded that Ryan reject Trump’s “dog-whistle racism.” After refusing to leave, all eleven protesters were arrested by the police.

The young protesters, along with a group of supporters gathered outside, were members of a new organization, All of Us 2016, which framed Tuesday’s action as the start of a “bold millennial-run campaign to demand racist Republicans and Wall Street Democrats disown the politics of racism and greed.” As their website makes clear, these are not the Bernie Bros or die-hard idealists that the media has frequently framed their generation to be. Instead, they come off sounding more like hardened pragmatists. As the second point in their platform states:

#AllofUs will vote to defeat Donald Trump, because we can’t risk letting a hate-filled billionaire become President. Hillary Clinton won’t solve the problems of our generation, but she’s the only one who can stop Trump.

Those arrested on Tuesday included former field organizers for the Bernie Sanders campaign, such as 25-year-old Waleed Shahid. He told Fusion, “Just yesterday, in the wake of terror, [Trump] called emphatically for racial profiling of Muslims like myself. That’s not the America young people want to live in—an America where people fear each other.” Another protester was even more explicit about his generation’s responsibility in the upcoming election: “The torch has been passed to us and we have to make sure we don’t drop it.”