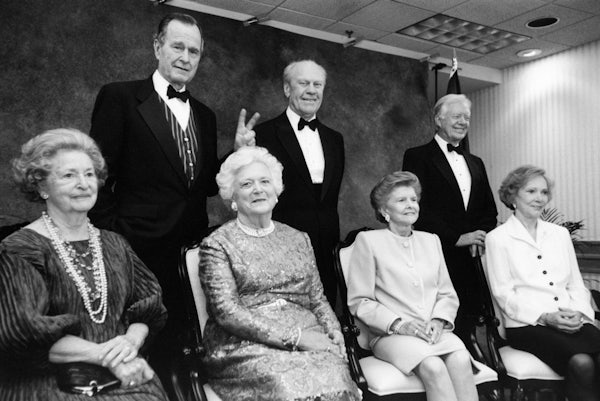 George H.W. Bush will be the first former president in over a century to not vote for his party’s nominee for president.

It’s now official: CNN reports that the 41st president told about 40 people associated with his Points of Light Foundation that he will be voting for Hillary Clinton in November. That means that Bush will be the first former president to not back his party’s nominee since 1912, when Teddy Roosevelt ran against his successor, Republican William Howard Taft, as a third-party candidate.

The Clinton campaign has made attracting Republican defectors a high priority and Bush is easily its biggest catch yet. The last two days of the Democratic National Convention, for instance, were all about attracting Republicans like Bush, but even then the campaign had a hard time getting them to speak at the convention itself. (Former New York City Mayor Michael Bloomberg was the big ticket in this category, but he’s mostly known as an independent.) And Bush is increasingly well-regarded by the American public, thanks in part to his charity work with Bill Clinton, the fact that President Barack Obama has repeatedly cited him as a model, and time. Jon Meacham’s favorable biography Destiny and Power was a bestseller when it was released last year.

But I’m not sure how many voters are going to be swayed by a Bush defection. Of course, the publicity is good—it highlights the fact that many in the country feel that Trump is a dangerous choice—but it could also be argued that Hillary Clinton’s outreach to Republicans is hurting her with young people.

There’s one other, intriguing possible outcome of Bush’s quasi-endorsement: a disproportionate response from Trump. If Trump flips out on the elderly George H.W. Bush, it could provoke a backlash. It could also draw his sons—George W., who is still popular with Republicans, and the oft-owned Jeb! (and sure, what the hell, Neil, the family’s bonus Jonas)—out of hiding.