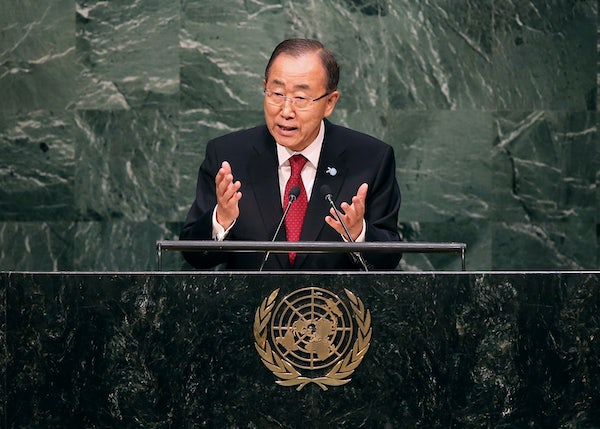 Ban Ki-moon just called out about half the room in his no-holds-barred General Assembly speech.

In his final address to the United Nations body, the normally plodding general secretary threw out his regular script of diplomatically worded missives and went straight for the world leaders on his blacklist. The list was long.

Ban began by calling out governance failures in Yemen, Libya, Iraq, Afghanistan, the Sahel region, Ukraine, South Sudan, and North Korea. “In too many places, we see leaders rewriting constitutions, manipulating elections and taking other desperate steps to cling to power,” he said. “My message to all is clear: serve your people. Do not subvert democracy; do not pilfer your country’s resources; do not imprison and torture your critics.” He also criticized the governments of Israel and Palestine, calling the current situation “madness.”

But Ban reserved the bulk of his wrath for those involved in the Syrian conflict, beginning with President Bashar al-Assad. ‘“Many groups have killed many innocents—but none more so than the government of Syria,” he said. He noted the recent bombing of a U.N. aid convoy as evidence that “just when we think it cannot get any worse, the bar of depravity sinks lower.” Nor did he withhold judgment from the governments that had aided in the conflict. Sounding more like a peace activist than a diplomat, he singled out those who were “feeding the war machine”: “Present in this hall today are representatives of governments that have ignored, facilitated, funded, participated in or even planned and carried out atrocities inflicted by all side.”

Ban also took to task world leaders and candidates—with perhaps a certain U.S. presidential candidate in mind—who had scapegoated Muslim refugees and migrants, calling it a form of “cynical and dangerous political math.”

It couldn’t have been a darker address for the general secretary, who is stepping down when his second term expires at the end of this year. Why did Ban save his best for last in a tenure rocked by U.N. peacekeeping scandals and more global conflict and upheaval than recent terms have seen? As he eyes his next steps—he may run for president of South Korea—perhaps his final speech was part of a political transformation into an elected world leader himself.