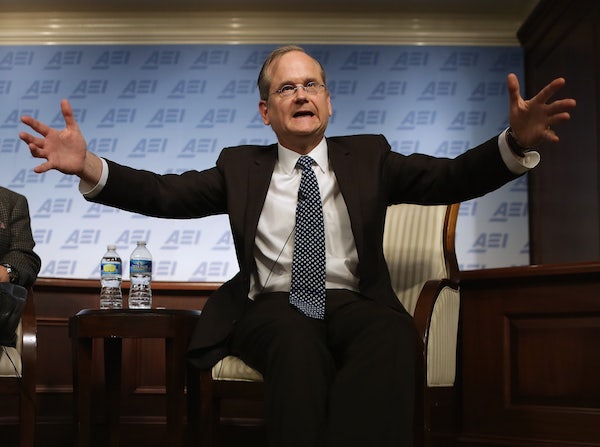 Lessig, the Harvard professor and former single-issue presidential candidate, was in Iceland when the news broke of his guest appearance in the hacked emails of Podesta, the chairman of Hillary Clinton’s campaign. Presumably, Lessig does not have an international data plan, for when he landed at JFK his inbox was “flooded with questions” about this exchange between Podesta and Tanden, the president and CEO of the Center for American Progress:

This is rude and petty and rather extreme, given the subject, but we’ve all emailed or Gchatted similarly rude and petty and rather extreme words about someone not quite deserving of such bile. That said, if it were proven publicly that someone had written this about me, I would respond in kind—perhaps “kick the shit out of him on Twitter”—or at least demand an apology. I am human.

Not Larry Lessig. On his blog Tuesday, he wrote:

We all deserve privacy. The burdens of public service are insane enough without the perpetual threat that every thought shared with a friend becomes Twitter fodder. Neera has only ever served in the public (and public interest) sector. Her work has always and only been devoted to advancing her vision of the public good. It is not right that she should bear the burden of this sort of breach.

The Twitterati rejoiced over this rare display of internet civility.

Perhaps Lessig really is this magnanimous, in which case he’s ostentatiously so—to the point that I’m tempted to agree with Tanden. But I believe he’s twisting the knife. Consider how Lessig is characterized earlier in the email exchange, and then re-read his blog post. That’s precisely the response you’d expect from a smug, pompous law professor—an impression so spot on, in fact, as to seem quite deliberate.

The Harvard man is no dummy. I think he knows exactly what he’s doing.

UPDATE: Tanden wrote in an email to The New Republic, “While I do not authenticate any other emails that were stolen, I personally and profusely apologized to Professor Lessig as soon as this email surfaced and I deeply appreciate his incredibly gracious response.”