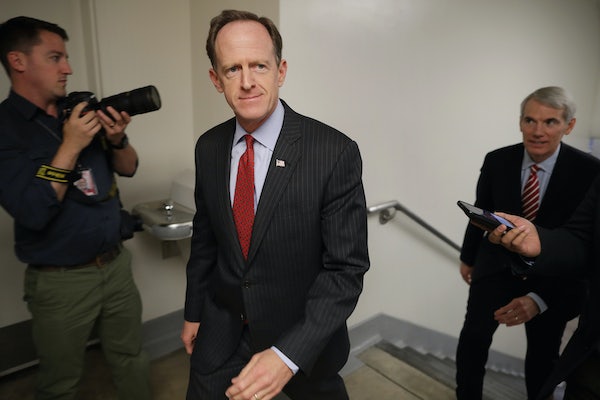 This Republican senator still hasn’t decided whether to back Donald Trump.

Pat Toomey of Pennsylvania is planning on voting around 6:45 p.m. this evening, according to the Morning Call—and there’s no word from his campaign on how he’ll vote.

Toomey was swept into office in the Tea Party wave of 2010. Once seen as a conservative hardliner, he has since softened his rhetoric on issues like gun control, partly in an attempt to win over moderate voters in the Philadelphia suburbs who play a key role in deciding statewide races in Pennsylvania. Trump, however, has made Toomey’s efforts to recast himself as an empathetic moderate much harder. The Republican nominee is still popular among many Republicans in the state’s central corridor: Disavowing him outright would risk alienating a large chunk of the Republican base. But Toomey also needs the support of affluent Republicans in the Lehigh Valley and Philadelphia and Pittsburg suburbs, where Trump is much less popular. Polls show Toomey lagging behind his Democratic challenger, Katie McGinty.

Toomey’s solution to this political pickle has been to ignore Trump altogether. In August, over a year after Trump entered the Republican primary, he told the Washington Post he was “still learning things about this nominee.” Even now, on Election Day, Toomey seems to want voters to believe he’s still on the fence. This, admittedly, is a tough sell. You’d think he ought to have “learned enough” about Trump in the last year and a half to be able to make up his mind.