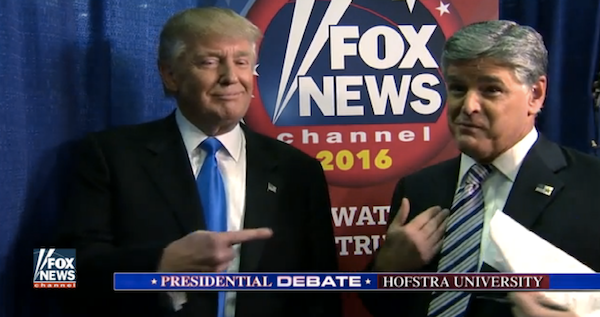 It’s going to be four years of Trump taking Sean Hannity’s word for it.

On New Year’s Eve, Trump promised a big revelation about the alleged Russian hacking of the DNC. It now seems increasingly clear that the source of this revelation is not the United States intelligence community, but Fox News’s Hannity. In any case, Trump spent Wednesday morning being mad about the coverage of the hacks.

There are many reasons why Americans should be wary of claims made by “the intelligence community” that have not been independently verified. But that is not what’s happening here. Instead, Trump is simply elevating Julian Assange above the CIA and other intelligence-gathering services, even though Assange is not what you’d call a credible source. In any case, just because Assange released the documents doesn’t necessarily mean that his account is more reliable.

But the really telling tweets—a phrase I regret I may be writing for the next four years—are the final two, in which Trump lambasts the Democratic Party for its poor cybersecurity and the media for not holding them accountable for said poor cybersecurity. This is astonishing: Coverage of the various email scandals almost certainly played a role in electing Trump. But it also shows that, deep down, Trump’s response to the Russia hacks has less to do with national security than it does with his obsession with his own legitimacy, as a loser of the popular vote who may have been (inadvertently or intentionally) pushed into office by a foreign power.