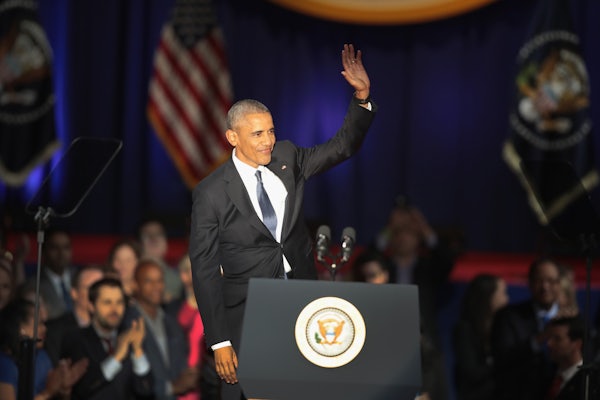 Barack Obama is the last reasonable man in a world gone to hell.

Obama will be remembered for his soaring, Lincoln-esque speeches, but his farewell address was a little bloodless—and more than a little professorial. Even his account of his successes was often tinged by the sense that he could only do so much and that there is still much work to be done. “Yes our progress has been uneven, the work of democracy has always been hard, it’s always been contentious,” Obama said. “Sometimes it’s been bloody. For every two steps forward it feels like we take two steps back.”

Like many of Obama’s speeches, it will likely age gracefully, because it was a sober and mature response to the most pressing issues facing America. He spoke of the dangers of a changing, fracturing world. He warned against living in bubbles in which people only engage with others like themselves. He reiterated his fundamental belief that reason and decency will ultimately overcome petty partisanship. “Democracy requires a basic sense of solidarity,” Obama said. His speech was a plea for Americans to work together “regardless of our party affiliation or particular interests,” and to “restore the sense of common purpose we so badly need right now.”

But, in being wise and perhaps even prescient, he also seemed out of step with his operatic times. It was telling that the most well-received parts of the speech involved him tearing up and showing emotion—though in Obama’s case, these uninhibited moments were devoted to Michelle, his daughters, Joe Biden (who flashed Obama the Shooter signal), and his staff.

It was a farewell speech in the tradition of Eisenhower: a celebration of his accomplishments, but also a warning of the path that the country is on. It was a speech about accepting change, even when it’s scary, and rejecting illiberalism and hate. More than anything, the speech presented a contrast that may help define its legacy in the months and years to come: Donald Trump certainly won’t give anything like it.