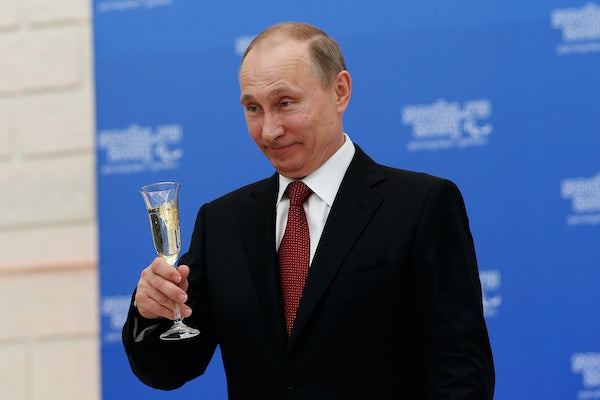 Vladimir Putin is seizing his moment.

Much remains to be proven, but the general consensus is that Russia’s hacks of the DNC and John Podesta’s emails were undertaken to help undermine the credibility of the United States’s political system. That has been a goal of Putin’s Russia for some time, but it has never been so successful—not only was faith undermined, but Putin’s good buddy Donald Trump is about to take over the White House. Now, Putin is twisting the knife, just a little bit.

In a press conference on Tuesday, Putin lashed out against the explosive leaked dossier that alleged that Russia had compromising material on Trump and that Trump had paid prostitutes to pee on a bed while he watched. “People who order fakes of the type now circulating against the U.S. president-elect, who concoct them and use them in a political battle, are worse than prostitutes because they don’t have any moral boundaries at all,” Putin said, apparently without irony. Putin even went as far to suggest that the leaks were part of a broader plan orchestrated by President Obama to “undermine the legitimacy of the president-elect” despite his “convincing” victory. (These things were also said without irony.) This is largely in keeping with the spirit of the Trump team’s own explanation for the leaks.

Putin also argued that the allegations simply weren’t plausible. “It is true that when he came to Moscow—I don’t remember when, a few years ago—he was not a political actor. We did not know about his political ambitions. He was just a businessman, one of the rich people of America. What do you think—we have special security services running after every American billionaire? Of course not. It is complete rubbish,” he said.

But the best part of Putin’s defense was his endorsement of Russian hookers. “This is an adult, and a man who for years organized beauty contests and spoke with the most beautiful women in the world,” Putin said. “I can hardly believe that he ran off to meet with our girls of low social morals. Although of course ours are the best in the world.”

There you have it. Russia has the best sex workers in the world, but Trump certainly wouldn’t have taken the bait.