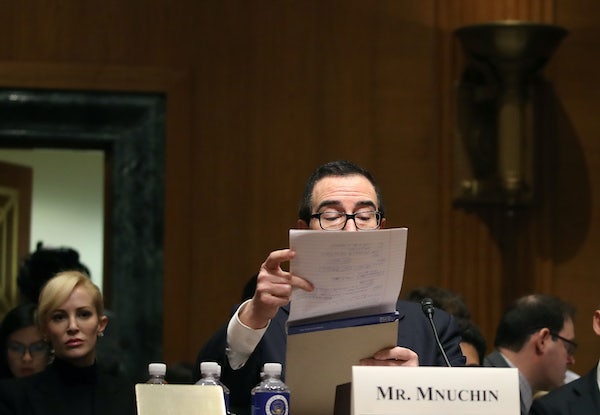 The bulk of Mnuchin’s hearing has so far been devoted to his offshore hedge fund—the Democrats have been trying to trap him into admitting that it’s a tax haven. Mnuchin has certainly been cornered on the issue, but has still held his ground. Mnuchin has argued it was common (who doesn’t have an offshore hedge fund?) to use such a setup. “In no way did I use them whatsoever to avoid U.S. taxes,” Mnuchin said. Instead his offshore hedge fund was for “pension funds and nonprofit institutions. And as Treasury secretary, I would look at these rules. ... I can sure you I paid all my taxes as was required.” Uh huh.

The Democrats are chasing a rabbit here. Grilling Mnuchin on the offshore hedge fund could pay big dividends if he slips up or if something is discovered later, but the questions at the start of the hearing have been very specific and don’t do as much as they could to build the narrative that they’re clearly grasping for: that Mnuchin is an out-of-touch plutocrat who doesn’t pay his fair share. (Sound familiar?) But it has been moderately effective: Mnuchin is getting increasingly irritated at having to answer the same type of question over and over again.

But so far Democrats may be missing a big opportunity to hammer Mnuchin on foreclosures. Mnuchin should be made into a poster child of the housing crisis, but it took well over an hour for Democrats, led by Sherrod Brown, to start to sink their teeth into him. That should be their central focus. Getting Mnuchin to admit that his bank OneWest foreclosed on veterans, among others, goes a long way to build that narrative.

Mnuchin, in response, has tried to play the role of the humble striver who made it big, telling the committee, “I started on a folding chair in the mortgage department.” But that’s not quite true.