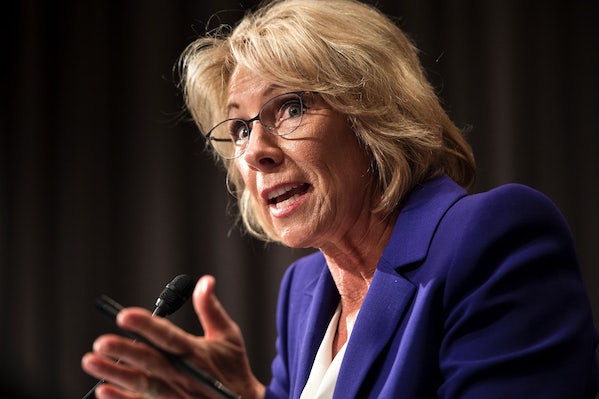 Betsy DeVos is such a disaster that bitter enemies are uniting against her.

Before her wince-inducing Senate confirmation hearing on Tuesday, the education secretary nominee’s most visible critics were teachers union leaders, like Randi Weingarten and Lily Eskelsen García, who recognize her as a right-wing advocate of school privatization. But on Thursday, as unions organized a national day of action against DeVos, one of their fiercest foes in the education policy wars announced its opposition to her confirmation, too.

“We are strong supporters of choice married with accountability, but as vital as parental choice is, choice alone is not an answer for ensuring the education of 50 million kids,” said Shavar Jeffries, national president of Democrats for Education Reform, a left-of-center group that supports “school choice.”

Jeffries noted that DeVos was “non-committal on whether public schools should be de-funded or privatized,” and voiced a series of other concerns on issues ranging from federal support for students with disabilities to higher education regulations. “We do hope that at some point Mrs. Devos will speak more expansively about her vision for all public schools and the federal role in ensuring our schools work for our kids,” he said. “But based on the record before us, we cannot support her nomination.”