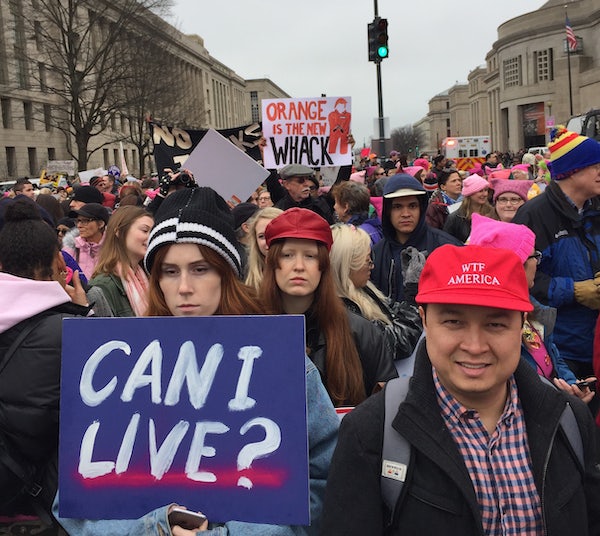 At least we made Donald Trump mad.

The last time I attended a protest of any kind was in the dreary spring of 2003, when our professor of European history dismissed class early so we could stand out on the great lawn of our small liberal arts college and listen to a series of people speak out against the U.S. invasion of Iraq. It was the beginning of the 21st century, and yet the style of liberal protest had not evolved much from its predecessors in the 1960s; between speakers, an old hippie played Dylan tunes on an acoustic guitar. We were in the New England boonies, protesting to no one but ourselves and an overcast sky. I left the proceedings early, not with a sense of uplift and solidarity, but a twinge of embarrassment. Protests, I decided, were not for me.

I still am skeptical of the value of protests. The big question that hangs over the massive marches that occurred this weekend in Washington, D.C., and around the world is whether they will translate into something more—whether they will result in political action that impedes and maybe even thwarts the onslaught of the Donald Trump era, or are remembered as a monumental gesture of impotence. But as I marched across the Mall with my wife and our two-year-old daughter, I knew, with absolute certainty, that we were having an impact on one person in particular: that he was watching, that he was counting every body with mounting rage, that it mattered to him that I was there, along with hundreds of thousands of other people. I imagined him like the Grinch in his mountain lair, irritated by all the happy Whos he can hear singing down in Whoville; or, late at night in the White House, his face lit by the blue glow of his phone, like Saturn in his gloom.

During the march, politics was a simple thing, expressed simply, on a hilarious sign or in a conversation with a stranger who was smiling as hard as you were. It was right against wrong, the people against a tyrant. The solidarity was palpable, in the roars that would periodically sweep over the crowd like a wave, which were then disseminated by social media, perhaps even finding a tinny echo in the president’s own Twitter timeline. For a moment, our voices were being heard.