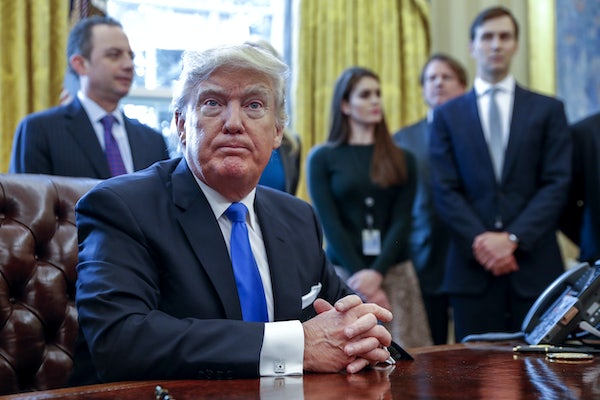 Trump is obsessed with his own legitimacy—or lack thereof—which has led him to embrace a conspiracy theory that millions of people voted illegally in the 2016 election for Hillary Clinton. There is, of course, no evidence of voter fraud on this scale ever occurring—investigations into such claims have yet to find more than a handful of illegal votes. But that hasn’t stopped Trump and his lackeys from repeating the claim again and again over the past few days. After being mocked by many, Trump announced on Wednesday that he would be launching an investigation of the election, which resulted in Clinton winning the popular vote by nearly three million ballots.

Trump’s investigation is most notable for what it isn’t: an actual investigation aimed at uncovering three million to five million illegal votes. Instead, it’s a much broader—and, for anyone concerned about democracy, more frightening—investigation meant to uncover things that Republicans can point to and claim as evidence of the possibility of voter fraud.

Outdated voting rolls, people who are registered in two states—none of these things mean that voter fraud has occurred. But Republicans—especially very cynical ones like Kansas’s Kris Kobach—have seized on them because they suggest that voter fraud could occur. They then use those claims to ram through voter ID laws that dramatically restrict access to voting by poorer and nonwhite voters, who tend to vote for Democrats.

That’s ultimately what Trump’s investigation will be about: surfacing just enough information to destabilize the truth, which is that practically nobody voted for Clinton illegally. At the same time, it will give Republicans at the state level and in Congress the ammunition to try to make sure Trump doesn’t lose the popular vote again in 2020.