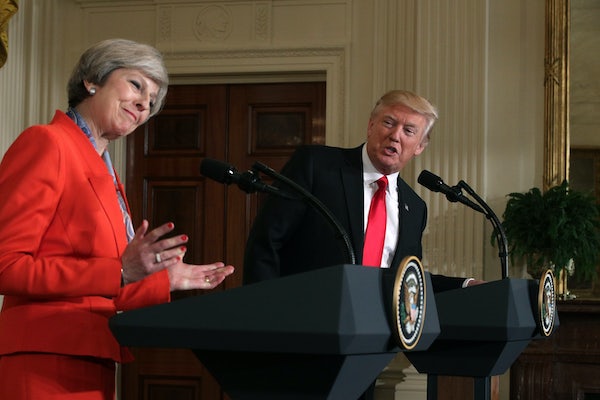 Donald Trump looked even less presidential next to Theresa May.

Setting aside her conservative politics, the British prime minister is what you’d expect from a world leader: smart, serious, dignified, discerning. Appearing with the president at the White House on Friday afternoon, she did her country proud by downplaying differences with Trump, including on torture, in an effort to advance her national interests. Trump, meanwhile, seemed small and uncomfortable throughout, especially when a BBC reporter asked him about his “alarming beliefs”:

Speaking with clarity and confidence, May easily showed off her policy chops and moral clarity on sanctions against Russia—which she supports—while Trump hedged. He also made obviously false statements, such as “I really don’t change my position very much.” And he went on a strange digression about how he’s very good at sizing people up, but sometimes ends up disliking people he thought he’d like. “Theresa, we never know about those things, do we?” he said.