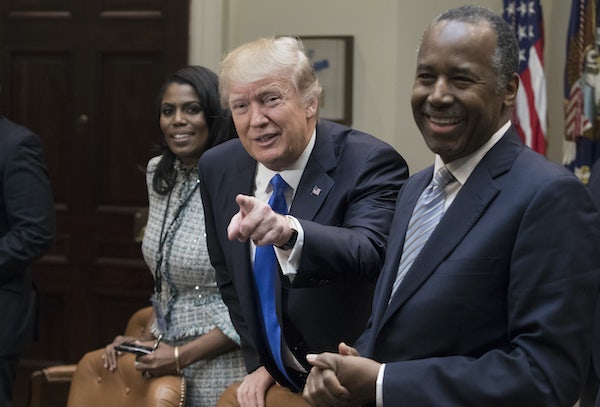 Donald Trump just gave his version of the “I have black friends” spiel.

At an event this morning in honor of Black History Month, the president delivered a free-associative ramble about all the black people he can think of, plus a few pithy interludes disparaging the press. He opened what he called “our little breakfast” with a thanks for all that Ben Carson—who he has charged with fixing our “terrible” inner cities “big league”—taught him on the campaign trail about the struggle of black Americans.

He didn’t neglect to mention our nation’s civil rights heroes. “You read all about Dr. Martin Luther King a week ago when somebody said I took the statue out of my office,” he said, referring to an erroneous report from Time. He reassured the room that not only did the statue remain in the Oval Office, but that it was “one of the favorite things.” He similarly honored Frederick Douglass as “an example of somebody who’s done an amazing job that’s being recognized more and more.” Rosa Parks and Harriet Tubman, he said, had had “big impact.”

Then he went on to thank all the black people who have been nice to him on television—Pastor Darrell Scott (part of his transition team), and longtime associate Omarosa Manigault, who he announced is “actually a very nice person. Nobody knows that.” He also acknowledged CNN’s Paris Dennard for being his lone black supporter at the network, regretfully adding, “I don’t get to see you as much. I don’t like watching fake news.” All in all, it was a perfect opportunity to show the world that Donald Trump has black friends, and is not in any way racist.