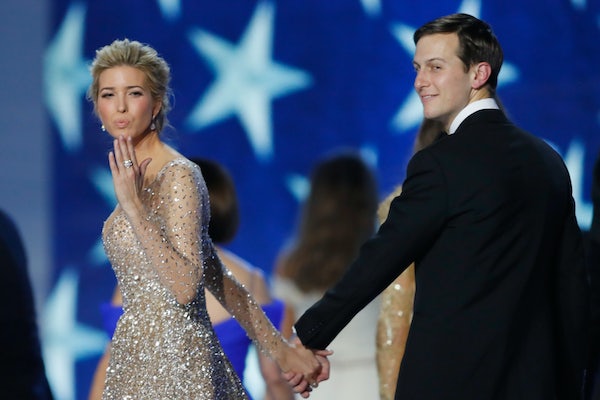 Let’s not give Ivanka Trump and Jared Kushner too much credit for killing an anti-LGBT executive order.

One of the worst memes of the past 20 months or so is that Ivanka Trump is a Donald Trump whisperer—that she can temper her father’s most authoritarian and damaging impulses. From afar, at least, she is the proverbial apple fallen far from the tree—diplomatic, liberal(-ish), capable of a degree of self-reflection. And there’s no doubt that her steadfast support of her father helped many voters feel comfortable supporting him—maintaining the loyalty of Ivanka Trump ended up being one of Donald Trump’s best political tactics.

The problem is that the meme was based on a toxic mix of wish fulfillment and Ivanka’s own carefully manicured public image. Though far from teflon (her clothing line just got dropped from Nordstrom’s because she is her father’s daughter), she’s been incredibly skillful at avoiding being held accountable for her father’s racist and sexist rhetoric and his authoritarian policies. But since Trump’s presidential campaign began, Ivanka has done little to justify her moderate image or to bolster the hopes of those who felt that she would be a moderating influence on his presidency.

That changed somewhat on Friday when Politico reported that she and her husband, the Alexandre Dumas fan Jared Kushner, helped scuttle an anti-LGBT executive order that would have denied many protections to LGBT people in the workplace. “Two sources close to Kushner and Ivanka Trump, who have a record of supporting gay rights, said the couple favored putting out a clear statement from the president, promising to uphold the 2014 Obama executive order and stopping the momentum for the turnaround in its tracks.”

Good! Jared and Ivanka clearly don’t want to get the Mike Pence treatment whenever they want to watch Hamilton. But religious conservatives are still pushing for rollbacks. Similarly, it’s not entirely clear how close Trump was to signing this executive order, which would have surely resulted in an enormous amount of pushback, possibly on the scale we saw last Saturday. Whatever moral objections they might have had, there were obvious political reasons to hold off—and treating holding off on rolling back LGBT wins as a political win is a very low bar.

Finally, in the grand scheme of Trump’s presidency, there has been very little moderation. If anything, the revenge-obsessed Kushner has been one of the biggest envelope-pushers within Trump’s inner circle. The problem with giving credit to Ivanka for stopping homophobic legislation is that, by extension, they should also take some responsibility for the other actions President Trump has taken. Ivanka Trump has gotten to have it both ways—taking credit for moderating her father on certain issues, while avoiding responsibility for others—for too long.