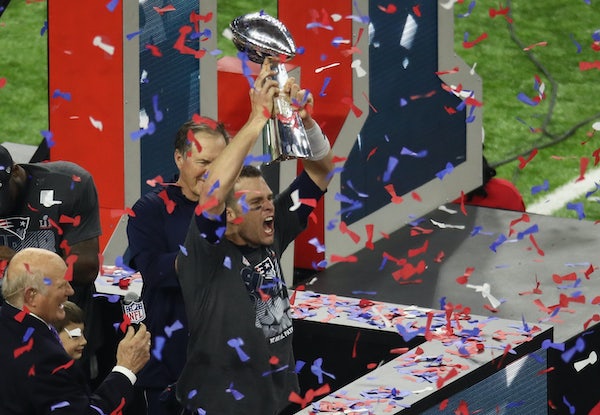 In Trump’s America, the bad guys are on a roll.

The Super Bowl was about politics only in the way that practically everything is now. Calling what Lady Gaga did a political statement stretches the term to its breaking point. And advertisers seemed to have looked at the election results and Donald Trump’s poll numbers and realized that what Americans want right now is to feel better about a crumbling world by throwing money at multinational corporations that superficially share their values. The lazy political jokes were going to come no matter who won—if the Falcons won it would be cathartic, if the Patriots won it would be yet another victory for the lizard people. It didn’t help, of course, that the Falcons squandered a 25-point lead and a 98.9 win probability in a way that was reminiscent of Hillary Clinton’s stunning election defeat. (The metaphor, however, still isn’t very good—the Falcons were underdogs going into the Super Bowl.)

But sports, like children’s fantasy novels, are not politics, thank god. The only resonant point is that bad guys are winning right now because bad guys win and good guys lose.

The silver lining was watching tens of thousands of the most Boston-y people on the planet booing Roger Goodell as he handed the Vince Lombardi Trophy to Patriots owner and Friend of Donald Trump Robert Kraft. Goodell—perhaps the highest paid fall guy in the world—always deserves to be booed by a stadium full of angry drunks, but he especially deserves it after leading a Benghazi-ish witch hunt against Tom Brady, which led the Patriots quarterback and Friend of Donald Trump to be suspended for the first four games of the season. (It also gave Brady, Kraft, and Patriots coach and Friend of Donald Trump Bill Belichick perhaps the three most unearned chips on shoulders in world history.) It sucked to watch Kraft shout about how sweet the victory was, but it was almost worth it to watch Goodell try and fail to maintain his dignity as the boos cascaded. Almost.