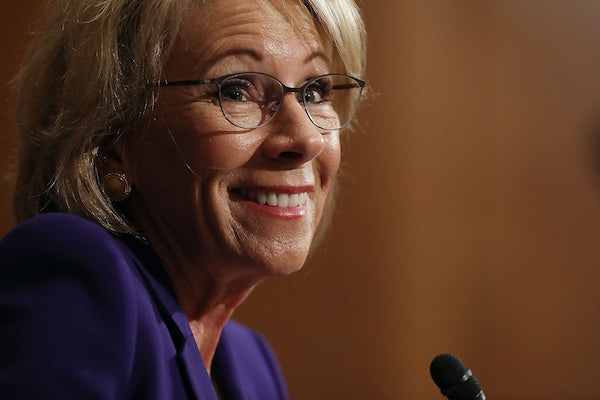 It looks like Mike Pence and millions in campaign contributions are going to save Betsy DeVos.

Late last week, DeVos’s nomination to lead the Department of Education looked to be in jeopardy after two Republican senators, Lisa Murkowski and Susan Collins, jumped ship, citing DeVos’s radical views and, particularly, her support of vouchers, which can cripple rural school districts. DeVos’s views on education—she believes in Jesus and privatization, though not always in that order—have come under withering attack from teachers, parents, and many, many others. In a cabinet full of controversial and radical figures, her nomination has received perhaps the most criticism—only Jeff Sessions, who once joked that he thought the KKK was “OK until I found out they smoked pot,” can compete.

DeVos’s nomination wasn’t only controversial because of her radical views or her incompetence. Her financial holdings also seem to make conflicts of interest inevitable. (Sound familiar?) Over the weekend, former ethics lawyers for George W. Bush and Barack Obama called on the Senate to dismiss her nomination because “her financial holdings present significant—and unresolved—conflict of interest issues. She also failed to provide the Senate with accurate information about her involvement with outside organizations.”

But it looks as if DeVos will survive by the skin of her teeth. Right now, she has 50 votes in the Senate, which means that Vice President Mike Pence, a friend of the ultra-wealthy, ultra-conservative DeVos family, will cast the deciding vote in her favor. Indeed, it looks as if many Republicans will be kept in line because of the tens of thousands (if not more) they’ve received in campaign contributions from the DeVos family. (The DeVos family has contributed hundreds of millions to the Republican Party in campaign contributions and dark money over several decades.) The Democrats, powerless to stop her, will spend the next 24 hours talking about how bad she is on the floor of the Senate, which is better than nothing.

If there’s one silver lining here, it’s that the mobilization against DeVos has been profound and has inched over partisan lines. That’s because DeVos’s Department of Education will adversely affect students of widely different backgrounds across the country. And it also suggests that this fight won’t end with her confirmation.