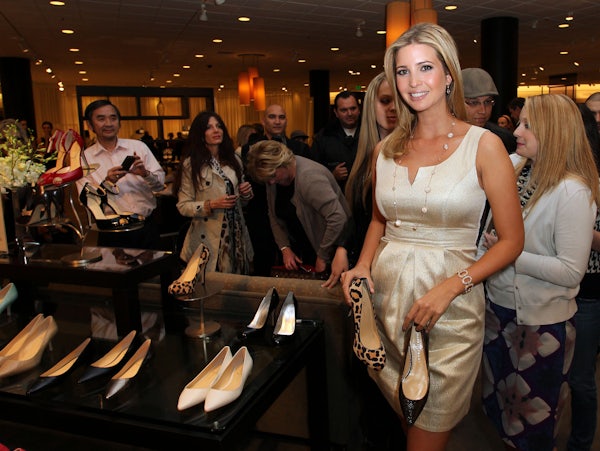 Sean Spicer: An attack on Trump businesses is an attack on President Trump.

On Wednesday, Trump took to Twitter to attack Nordstrom’s for dropping his daughter’s underperforming clothing line.

This is a very dense tweet. Trump seemingly admits to being a bad person who relies on his children to provide him with the moral compass that he otherwise lacks, while also using the office of the president to attack a company for hurting his daughter’s financial well-being.

It’s also an obvious conflict of interest. But when White House press secretary/gum boy Sean Spicer was asked about it at the daily briefing, he told the media that there was nothing to see here, folks. “I think this was less about his family business than an attack on his daughter,” Spicer said. “I think for people to take out their concern about his actions or his executive orders on members of his family, he has every right to stand up for his family and applaud their business activities, their success.” Again, Nordstrom’s said it dropped Ivanka’s line because it wasn’t performing well—that may have been a reflection of politics (i.e. people not buying Ivanka’s clothes because she defends and normalizes her bigoted father) but was not political in and of itself.

In Trump’s tweet there is no difference between the “family business” and his daughter. Trump sees an attack on the business as an attack on the daughter, and responds in kind. Spicer further blurred the lines between Trump’s business interests and his presidency by labeling the decision to drop Ivanka’s line a “direct attack” on the Trump White House, which it obviously isn’t. This is exactly the situation that critics have warned about for months—Trump is using his presidency to further his family’s financial interests. Nordstrom’s stock tanked after Trump tweeted—it has since rebounded, but that initial fall will surely make companies think twice before axing underperforming Trump brands.

At any rate, this wasn’t even the most egregious thing Spicer said at the briefing. He also said, “I can only hope that if Coretta Scott King was still with us, that she would support Senator Sessions’s nomination.” King, of course, wrote a letter calling Sessions a racist who worked to keep black people from voting in Alabama.