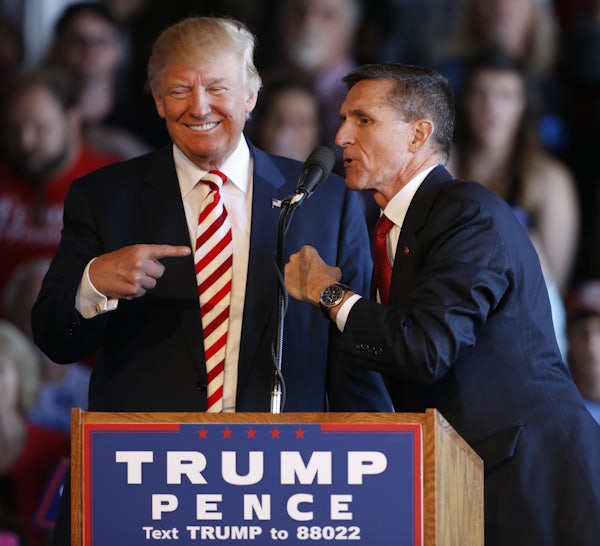 Michael Flynn resigned on Monday evening as national security adviser after admitting to misleading Trump and Mike Pence (who repeated Flynn’s version of events on national television) on the nature of his calls with the Russian ambassador, which took place weeks before Trump was sworn in as president. It is now clear that Flynn and the Russian ambassador discussed sanctions imposed by the Obama administration while President Obama was still in office, which is a big no-no for an incoming administration.

But the most important aspect of Flynn’s resignation isn’t that he (allegedly) lied to the president and vice president or even that he discussed sanctions with a Russian official. It’s that, as Jeet Heer wrote on Tuesday morning, Flynn’s relationship with Russian officials increasingly looks like the tip of an iceberg of compromising and possibly illegal links between Trump’s campaign and the Kremlin. The last precedent for this kind of thing was Iran-Contra, which merited a full congressional investigation and nearly sunk the Reagan administration.

The Trump administration is faced with a situation that’s incredibly damaging no matter how they spin it. At the very best, this situation suggests an incompetent administration, in which high-level officials don’t know the basics of governance or law—and a president who is unaware of the nature of the conversations between his highest advisers and foreign governments.

But the Trump administration was aware that Flynn had lied for weeks. Former acting Attorney General Sally Yates briefed them on the call before she was fired in late January, and indicated that Flynn was vulnerable to being blackmailed by the Russians. That Trump kept Flynn on anyways suggests a dangerous stubborn streak, if not something more nefarious. In any case, the administration’s explanation for keeping Flynn on is so inadequate even Matt Lauer can’t let it pass:

There were certainly bumps in President Obama’s administration—Benghazi, Fast and Furious, the rollout of the healthcare.gov—but none that implicated the president himself or led to him forcing out a cabinet official or senior White House adviser. We’re only three weeks into Trump’s administration and we’re already in Rumsfeld territory. And this is only the beginning—this is what happens when you elect a corrupt incompetent who openly staffs his White House with corrupt and incompetent people.