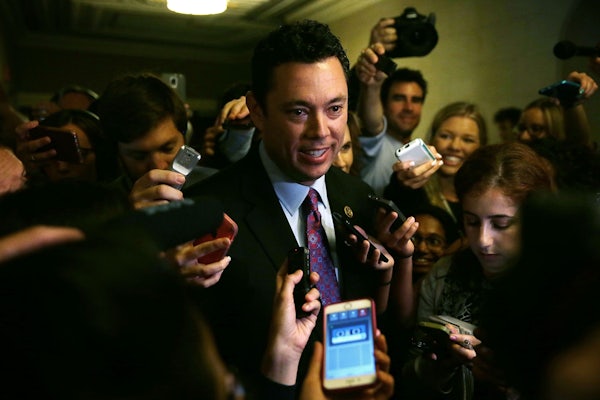 The GOP is going to own the Michael Flynn scandal, too.

Jason Chaffetz, the head of the House Oversight Committee, spent years investigating Hillary Clinton’s role in Benghazi and her use of a private email server, while promising to investigate her ties to foreign governments via The Clinton Foundation. These years-long investigations were supposedly about accountability, but the real reason they dragged on and on was to damage Clinton’s credibility. It worked.

Only three weeks into his presidency, Donald Trump’s administration is already embroiled in a scandal that looks to be bigger than any of the ones Chaffetz and his allies spent months investigating. His national security adviser Michael Flynn resigned on Monday because he was in contact with the Russian government before Trump’s inauguration about sanctions placed on Russia by the Obama administration. Flynn’s relationship with Russia not only suggests suspiciously friendly ties between Trump’s inner circle and the Kremlin, but also raises the possibility that someone on Team Trump (or Trump himself) ordered the call. The least you can say about it is that it deserves a congressional investigation. (The same is true for Trump’s apparent fondness for conducting classified business in public.)

And yet, congressional Republicans are acting as if Flynn’s resignation takes care of the scandal. Here’s Chaffetz’s response, for instance:

And Speaker of the House Paul Ryan, who muddied the narrative that has emerged in news reports, that Trump allowed Flynn to stay on his team for weeks after being informed of Flynn’s infraction:

This is insane. It would be insane even if these same people hadn’t spent years arguing that the appearance of possible misbehavior merited months of hearings and investigations. But it’s especially galling that, after years of political witch hunts, the GOP is acting as if obvious misbehavior and incompetence are totally normal—that the Trump administration is not only handling its affairs well, but that it has answered the necessary questions regarding its relationship with a foreign government.

There are obviously political reasons for this. Trump is very popular with Republicans, who control the fate of these congressmen. Chaffetz, Collins, and Ryan are more concerned with primary challenges and revolts from back-benchers than they are with uncovering the truth. But this is a short-term calculation. Trump’s popularity among Republicans may be high now, but it’s becoming increasingly clear that his scandal-plagued administration is headed towards a fall. Even if it doesn’t cost Trump his job, it may cost a number of congressional Republicans theirs.