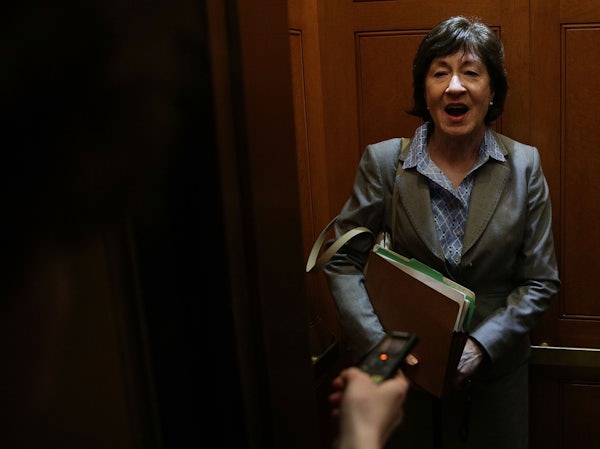 There is exactly one Republican senator who cares about saving the EPA.

Senator Susan Collins, the reliable moderate from Maine, said Wednesday that she will vote against President Trump’s controversial choice to lead the Environmental Protection Agency. Oklahoma Attorney General Scott Pruitt, best known for rubbing elbows with the fossil fuel industry, is expected to be confirmed by the Senate by Friday afternoon.

By opposing Pruitt, Collins is the only defector from the Republican Senate, which for the most part seems thrilled to have an incoming EPA administrator who questions the scientific consensus on climate change and has spent his career filing lawsuits against the EPA over its efforts to regulate pollution. In a statement, Collins cited “considerable doubts about whether [Pruitt’s] vision for the EPA is consistent with the Agency’s critical mission to protect human health and the environment.”

Collins may be the only Republican senator to oppose Pruitt’s nomination. But other Republicans have expressed concern about how the EPA will fare under Pruitt. Christine Todd Whitman, the former EPA administrator who served under President George W. Bush, has been speaking out against the nominee since December. She told me on Thursday that she still has concerns about whether Pruitt can be an impartial mediator between environmental and industry interests.

“He’s taken a lot of money from the fossil fuel industry, which doesn’t necessarily make you bad. But where you get into trouble is when you take what the industry gives you full cloth, and just repeat it wholesale,” she said. “He’s going to have to be very careful.”