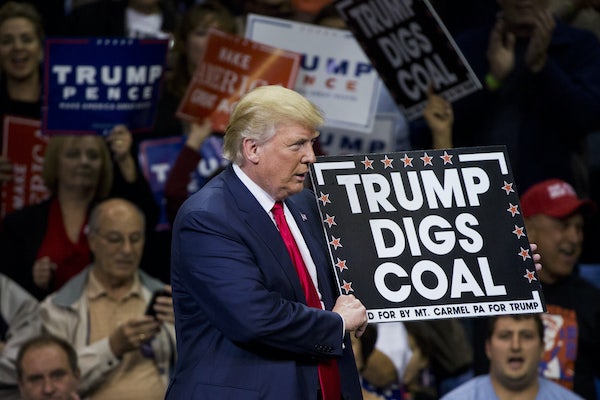 The president’s unhinged 77-minute press conference wasn’t the only news he made today. After an exhausting fracas with the media, he popped back into the Oval Office to repeal an environmental regulation restricting coal companies from polluting waterways with mining waste.

Trump signed a bill undoing the so-called Stream Protection Rule, an Obama-era regulation which aimed to curb environmental damage from mountaintop removal coal mining. During that particularly violent mining process, coal companies literally blow up the tops of mountains and dispose of the waste—which often contains heavy metals—in streams and other bodies of water. Research has suggested that this results in “adverse outcomes in community health” in many Appalachian towns.

Before signing the bill, Trump made sure to shake hands will Robert Murray, the CEO of one of America’s largest coal companies.

Murray, who once called the Stream Protection Rule the coal industry’s “biggest threat,” gave $100,000 to a Trump-supporting super PAC during the presidential election.