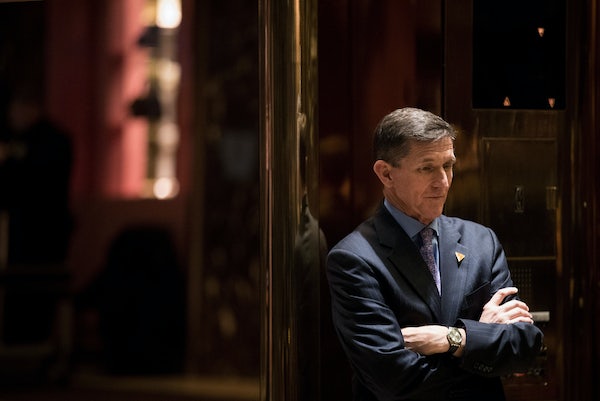 During the campaign, perhaps no one was more vocal about locking Hillary Clinton up than Flynn. At an August rally, he intimated that Clinton was a traitor, saying, “The enemy camp in this case is Hillary Rodham Clinton.”

“Lock her up is right!” Flynn shouted at the Republican National Convention. “If I did a tenth of what she did, I would be in jail today.”

It looks like Flynn will be able to test that theory! He was asked to resign this week after it became public that he had not only (possibly illegally) discussed U.S. sanctions against Russia with the Russians before Trump was inaugurated, but also apparently lied to the vice president about those discussions. The hole Flynn is in got a lot deeper on Thursday afternoon, when the Washington Post reported that Flynn apparently lied to the FBI:

Former National Security Adviser Michael Flynn denied to FBI agents in an interview last month that he had discussed U.S. sanctions against Russia with that country’s ambassador to the United States before President Trump took office, contradicting the contents of intercepted communications collected by intelligence agencies, current and former U.S. officials said.

The Jan. 24 interview potentially puts Flynn in legal jeopardy, as lying to the FBI is a felony, but any decision to prosecute would ultimately lie with the Justice Department. Some officials said bringing a case could prove difficult in part because Flynn may attempt to parse the definition of sanctions.

The Justice Department, which is now led by Jeff Sessions, will ultimately decide his fate. But either outcome is bad for Flynn. Either he gets thrown under the bus and becomes subject to criminal prosecution, or he becomes a partisan football, the subject of intense focus in the media and on Capitol Hill over Trump’s relationship with Russia. There are still many open questions about Kremlin-gate, including whether Trump ordered Flynn to speak to Russian Ambassador Sergey Kislyak, and Flynn might be tempted to talk.

Flynn is in deep trouble—and Trump may be, too.