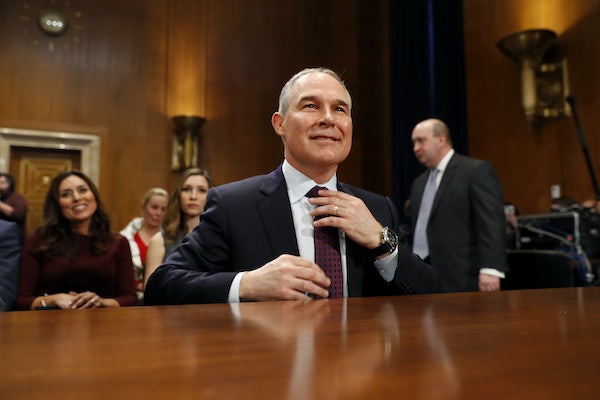 The EPA is already revolting against Scott Pruitt.

In what the New York Times is calling “a remarkable display of activism and defiance,” current employees of the Environmental Protection Agency are calling their senators to urge them to vote against Trump’s controversial choice to lead the agency. Pruitt, who has waged war on the EPA as Oklahoma’s attorney general, is expected to be confirmed later today.

The calls—while unlikely to make much of a difference in the final outcome of Pruitt’s confirmation—are unprecedented, insofar as they represent a looming and public clash between the EPA’s future leader and the people he’s supposed to lead. “I can’t think of any other time when people in the bureaucracy have done this,” James Thurber, director of the Center for Congressional and Presidential Studies at American University, told the Times.

The internal opposition to Pruitt will likely make for a rocky tenure. “It could get ugly,” Christine Todd Whitman, the former EPA administrator under George W. Bush, told me this week. “EPA career staff have ways of getting information out if they don’t like what the administrator is doing. They have friends on the hill they can go to. They can slow things down. They can make things really uncomfortable.” Whitman said she’s already hearing about more so-called “uncomfortable” acts. “The unions are organizing their members to protest in the street,” she said. (EPA employees held an anti-Pruitt protest in Chicago last week.)

Christopher Sellers, who interviews current and former EPA employees for the Environmental Data and Governance Initiative, expressed similar worries. His interviews are currently confidential, but he was able to identify at least one emerging theme. “Clearly the agency is in a stage of high alert right now,” he said. “And frankly, that it is an understatement.”