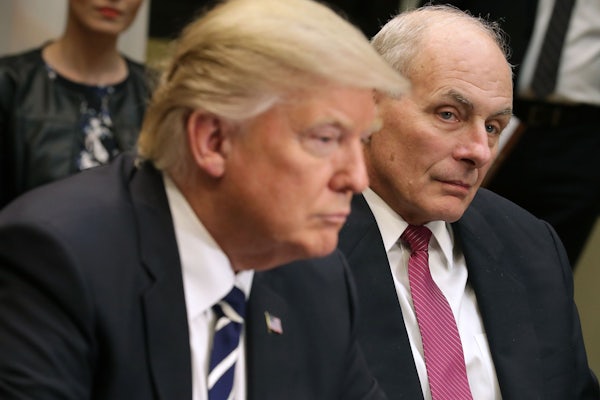 Is Trump’s reported plan to deploy troops to round up immigrants a trial balloon?

The Associated Press reports that the Trump administration is considering a radical militarization of immigration policy. The plan is to use the National Guard to round up undocumented immigrants in 11 states:

The Trump administration is considering a proposal to mobilize as many as 100,000 National Guard troops to round up unauthorized immigrants, including millions living nowhere near the Mexico border, according to a draft memo obtained by The Associated Press.

The 11-page document calls for the unprecedented militarization of immigration enforcement as far north as Portland, Oregon, and as far east as New Orleans, Louisiana.

The Trump administration immediately and categorically denied these reports. “This is 100 percent not true,” Press Secretary Sean Spicer told reporters. Notably, Spicer has yet to deny the particulars of the story. Furthermore, the Associated Press has a draft memo authored by Department of Homeland Security Secretary John Kelly, and received no answer from the White House or DHS when it requested comment.

What is going on here? It’s possible that this proposal was a trial balloon to test public opinion (reminiscent of a draft executive order rescinding certain LGBT rights in the workplace, which was never signed). It’s also possible that a government staffer leaked this alarming memo to the press to head off the White House, whose supposedly saner cabinet officials, like Kelly, billed themselves as moderating influences on the president. Or, as is always the case with this administration, this draft memo could just be the result of pure incompetence and stupidity.