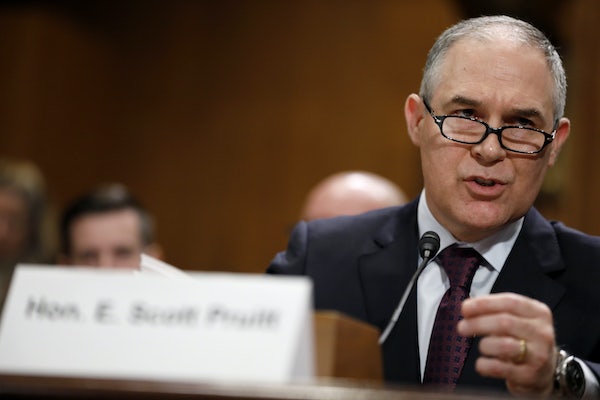 Some bombshells might drop on Scott Pruitt next week. The Senate confirmed him anyway.

Democrats and environmentalists have put up a stink over thousands of unreleased emails between newly-confirmed EPA administrator Scott Pruitt and fossil fuel interests. Pruitt was ordered by a judge on Thursday to release those emails, which were requested two years ago by a progressive watchdog group under a Public Records Act request.

Those emails could show any number of things—including nothing. But they were requested in the first place because Pruitt has a history of sketchy emails. In 2014, the New York Times found what they called “an unprecedented, secretive alliance” between Pruitt’s office (he was previously the attorney general for Oklahoma) and Devon Energy, one of Oklahoma’s biggest oil and gas companies. Pruitt had apparently allowed lawyers for Devon to write a letter to the EPA and put it on Oklahoma attorney general letterhead. What’s more, Pruitt regularly accepted political contributions from fossil fuel companies “within days of taking official actions that support those companies,” ABC News found.

The Center for Media and Democracy, which filed the records request, suspects the emails could contain more evidence of collusion between Pruitt and oil and gas interests. But Pruitt does not have to release those emails until Tuesday. That’s why on Friday morning, Democrats said they would attempt to delay Pruitt’s confirmation hearing until next week. In a press conference, they noted that it might even be good for Republicans to hold off, just in case there is something particularly scandalous in those emails. And they chastised Republicans for ignoring Pruitt’s emails while spending the presidential campaign focused on Hillary Clinton’s private email server. “It is the absolute height of hypocrisy,” Chuck Schumer said.

Mitch McConnell, however, said he would not allow a delay. Asked by a reporter to explain, he answered succinctly: “Because I choose not to.”

Pruitt was confirmed 52-46, with two Democrats voting in favor, and one Republican voting against.